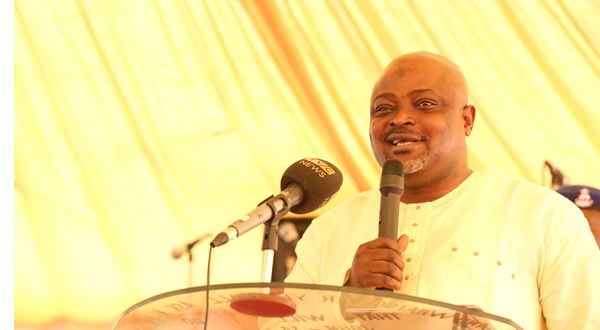 The Speaker of the Lagos State House of Assembly, Rt. Hon. Mudashiru Obasa has promised a more robust legislative performance in the coming year, geared towards the interest of the masses.

Obasa made the disclosure while speaking at LSHA chapel annual end of the year Thanksgiving/Christmas outreach programme tagged: ‘Double Honour’ held within the Assembly premises .

“God has been instrumental to making our work here impactful,without God’s intervention nobody can get the honour.

“We have done tremendously well in the year as people’s representatives there are many legislations we have passed, bringing good developments in the state.

“We have only one job; to represent the people,to make law and we are ready to do that for the State maximally, I want to assure people that whatever law or resolution we make would be in the interest of the masses”.

Reverend Folarin Obey was on hand to speak to the theme of the programme,citing the concept of honour as a divine arrangement that can ensure rapid growth and more development in state if allowed to fester more than before.

The Special Adviser to Governor Akinwunmi Ambode on Religion Matters who also represented him at the gathering , Reverend Dr. Kolawole Verralls, while speaking on the sideline noted the importance of choosing a day to celebrate God’s faithfulness to state by the legislature as a good omen, responsible for peace and tranquility enjoyed in the state.

Verralls quickly added that the style adopted by the Governor to engender religious tolerance in the state is novel, citing the recent inauguration of Nigerian Religious Council NIREC in the 57 councils of the State as a step in the right direction.

Hon. Victor Akande, the 15th patron of the programme, who also spoke about the event, expressed his gladness with the initiative, stating that the Lagos State House of Assembly will be better for it.

“Although we are in a festive period, I thank the speaker for this initiative,he is a man that love and fear God.

“So in order for us to come together and say thank you to God he sanctioned the organization of this event.

“It is a programme we have been doing since his assumption of his office and whoever will praise God for what he has done will get more, knowing too well that He has given us wisdom and knowledge that took us this far, more positive developments are envisaged .

Hon.David Setonji in his own contribution noted the significance of the gathering.

Evangelist Olubunmi Akinnaanu-Adeoye the guest artist at the event thrilled participants maximally to special rhythms focusing on the awesomeness of God’s visible in the state legislature and executive arm.