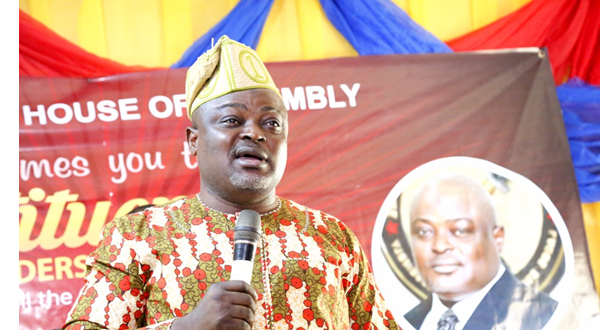 The Lagos House of Assembly Speaker, Rt. Hon. Mudshiru Obasa has appealed to the people of Agege to obtain their Permanent Voters’ Card(PVC) as it is their only access towards voting credible leaders in the 2019 general elections.

Rt. Hon. Obasa, at a stakeholders’ meeting where he gave account of his stewardship to his constituency, said PVC confers power on the electorate as a key stakeholder in the development of democracy.

“The only way to make impactful contribution to the development of democracy is for us all to obtain our PVC. If you have not registered, you still have a few weeks to do so. We have held series of meeting with the leadership of the Independent National Electoral Commission (INEC) in Agege to give them support on how to ensure a seamless registration process,” the Lagos Assembly Speaker who is also the Chairman of the Conference of Speakers of State Legislatures of Nigeria, noted.

He appealed to traditional rulers, community leaders and religious leaders to mobilize as many people as possible to collect their PVCs for them to participate in the electoral process.

Speaking on the theme: “Towards a Peaceful and Credible Election,’’ Rt. Hon. Obasa enjoined political leaders and party supporters to conduct themselves in ways that would promote peace and unity during and after the elections.

“We also urge religious leaders and parents to contribute to the success of the elections by preaching against violence of any form.

The Lagos Assembly Speaker also called for a community-based security trust fund for people to donate voluntarily to support the government in ensuring security of lives and properties.

According to him, security should be a collective responsibility of everyone in Lagos State.

“It is work for us all; paying attention to happenings around us, reporting strange activities and not shielding criminals helps to ensure everyone is safe. Let’s not keep quiet,” he said.

He called on various Community Development Associations to monitor the works of the Lagos Neighbourhood Safety Corps in order to measure their performance.

“LNSC was not created to work in collaboration with the police by gathering intelligence on criminals within neighbourhoods and reporting them for arrest and prosecution. The thieves stealing parts of parked vehicles live in our communities.’’ Obasa said.