Why We Are Bringing Back Ikorodu Cultural Heritage With ASA – Agunbiade 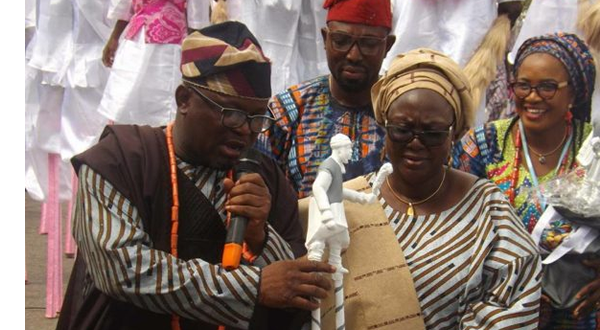 Why We Are Bringing Back Ikorodu Cultural Heritage With ASA – Agunbiade

ASA culture amongst the people of Ikorodu in Lagos State has been described as one of the best cultural heritage of the people of the state.

According to the Majority Leader of the Lagos State House of Assembly, Hon. Sanai Oyeniran Agumbiade aka SOB, who sponsored ASA Carnival-cum-book launch and statue unveiling on Saturday 4th November, the Agere culture should not be allowed to die.

“I went to Dublin in 2013 and I saw ASA as one of the features of the international conference so I decided to bring back the culture because it started from here. We have been on it since 2015 and here we are today, it is now a success story.

“We started with one group, now we have over seven communities across Ikorodu Division. We are really happy. We are reviving ASA as we have done in Imota, Igbogbo and other places. It is our pride and we will continue to promote it. “The culture is already dying. I am fulfilled with the event and for bringing back our culture,” he said.

Governor Akinwunmi Ambode, who was represented at the event by the state’s Acting Commissioner for Tourism, Arts and Culture, Hon. Adebimpe Akinsola expressed happiness over the event.

Akinsola said that the governor was happy that SOB is bringing back the culture of the people.

“Ambode promised the people in his inaugural speech that he was going to bring back tourism, entertainment and sports. He has been able to do this. The economy of Lagos State would be improved by tourism.

“We have something to show the people. We have all it takes to make the state the destination of tourism in Africa. His Excellency is happy that this is happening again in Ikorodu,” she said.

Akinsola, who also hails from Ikorodu, recalled that ASA was what they used to watch when they were young, adding that now that the state has a Governor that is interested in tourism, “we are able to do this again. I give kudos to his Excellency for creating an atmosphere for this to happen. We have started registering all the festivals in the state, we have registered this one too and it would be in the calendar of events for 2018,” she stated.

The representative of Ikorodu Federal Constituency in the House of Representatives, Hon. Babajimi Benson described the event as very important, and a cultural renaissance that was brought back by Hon. Sanai Agunbiade.

He said: “It is a step in the right direction as it is bringing value to our community, state and the country in general.

“The Lagos State Government is sponsoring restructuring agenda and I believe that this town can generate income from its tourism potentials that can add to the GDP of the state.

“Tourism is a noble thing that can contribute to the development of the state,” he said.

Benson revealed that he has been promoting culture and education through his foundation and that tourism and culture can add value to the nation’s GDP and that this is what can be promoted beyond the country.

In his goodwill message at the event, another lawmaker in the state assembly from Ojo Constituency 1, Hon. Victor Akande explained that culture is the only heritage that the people have by nature and by their grandparents.

In his words, “We are lost and doomed without our culture. We have to go back to the basics and our culture.

“We have to revive our rich culture. The only way you can know us is through our culture. Tribal marks is now a thing of the past because we have forgotten our culture.”

The lawmaker said further that tribal marks were used to identify the people in the past, adding that Agunbiade has brought back the memories of yesteryears with the event by going back to tradition to tell the world about the culture of his people.

He commended the politician for bringing traditional rulers in the community together, saying that they were the custodians of the culture of the people, and that the event is a way of showcasing the culture and tradition of the people.

“Let me thank the convener for gearing us up to promote our culture. He has done well, he is somebody we want to emulate. He has been doing well and he is performing as a legislator, I will only advise him to continue to do more for the people,” he said.

Hon. Sola Giwa from Lagos Island Constituency 2 in the assembly used the occasion to commend Agunbiade, while stating that what was being done at the event was laudable, and that things like that should continue so that the people’s culture would not go into extinction.

Also speaking, Hon. Erogbogbo Rotimi advised the people not to keep their culture under the table as he expressed happiness for being part of ‘this ground breaking event.’

“This is the mother of all carnivals in the state. I am proud of Hon. Agunbiade. Culture is about our people. We have so many things to show in Ikorodu, we have seen this as an advantage. I am proud of the government of Lagos State because we are doing everything possible to bring culture to the front burner in the state,” he stated.

While commending Hon. Agunbiade for organising the event, the Ayangburen of Ikorodu, HRM, Oba Kabir Shotobi stressed that the lawmaker has done well for the people, and that the event is memorable as it brought back the cultural heritage of the people of the Ikorodu area.

He advised the government, both state and federal, to leverage on this and do everything to further promote the culture of the people of the area and the state in general.

Highlights of the event included cultural displays by ASA groups from different communities in the area, while Fuji music superstar, Wasiu Alabi Pasuma later entertained guests at the colourful event.