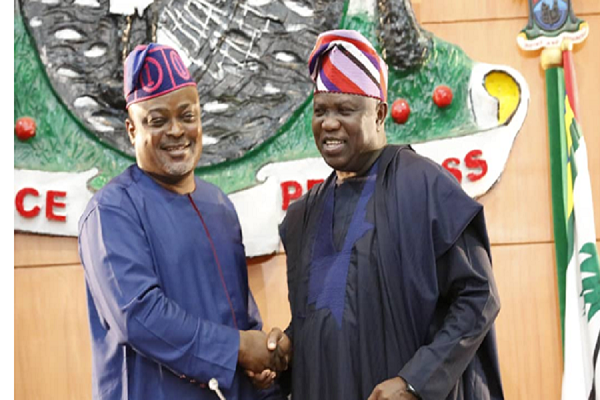 
After weeks of waiting and suspense, the Lagos State Governor, Mr. Akinwunmi Ambode on Tuesday presented a budget size of N852.3bn to the state House of Assembly.The Governor who arrived the hallowed chamber at 2:33 p.m. explained that there was reduction in projected revenue of the state which according to him affected the implementation of the 2018 budget estimates.In December 2017, Ambode had presented budget size of N1.046 Trillion for 2018 as opposed to 2019 which is less than a trillion.According to the Governor, the Recurrent Expenditure stood at ₦ 389.560bn while the Capital Expenditure ₦ 462.757bn which represented Capital/Recurrent Ratio of 54:46.Ambode disclosed further “the projected total revenue for Year 2019 is ₦775.231billion, of which ₦606.291billion is expected to be generated internally, ₦168.940billion is expected from Federal Transfers while a total of  ₦77.086billion will be sourced through deficit financing within our medium term expenditure framework. The breakdown of the allocations is as follows will be rendered by the Ministry of Budget and Planning and Finance subsequently.”In the outgoing year however, we experienced a reduction in our revenue projections, which affected our projected performance and our desired implementation of the Y2018 Budget. “The overall Budget performance as at November 2018 stood at 60%/₦574,206billion with actual cumulative total revenue of ₦530,192billion/64%, Capital Expenditure closed at ₦311,930billion/49% and Recurrent Expenditure performed at ₦262,276billion/82%.”In preparing the Year 2019 Budget therefore, we were very mindful of the out-going year performance, the yearnings of our people and the fact that we are going into an election year. Consequently, we are today presenting a Budget that will be all-encompassing, reflect the level of resources that will be available and with special consideration to the completion of major on-going projects in the State.  He added, ”Our priority on completion of major infrastructure projects and smooth transition to the next administration, we are are happy to propose a Year 2019 budget of ₦852,316,936,483, (852.317billion) including a deficit financing of N77.086bn which is expected to be sourced from internal loans and other sources. “Consequently, the 2019 Budget is projected to consolidate on the economic gains made so far by capitalising on realistic, budget friendly programmes and projects.”In 2019, as was with our previous budgets, Economic Affairs still dominates the sectoral allocation of the proposed budget. This is due to our continued focus on the completion of major on-going projects such as: Oshodi-Murtala Mohammed International Airport Road; Agege Pen Cinema Flyover; Phase II of Aradagun-Iworo -Epeme Road, Oshodi Interchange Terminal; completion of JK Randle Complex, Onikan Stadium; Imota Rice Mill; Renovation/Furnishing of Lagos Revenue House, amongst others in order to meet their specified deliverable outcomes without any bias or prejudice to others,” the Governor said.Earlier, “the last three years I have had the honour of presenting the budget of our State to this Hallowed Chamber and each time, I have come with the enthusiasm and energy to meet our partners in the continuous work for the progress and development of our State. It is with the same enthusiasm that I am here again today to present the year 2019 Budget.”Each time I have come here, we have been accorded a very warm and cordial reception by this Honourable House and for this, we are very grateful. This House has been a solid partner in progress and none of the achievements recorded in our State in the past Three and Half years could have been possible without the support and cooperation of this Eighth Assembly. “Rt. Hon. Speaker, I have been very privileged to have worked with this House and there is no bill we have brought forward that has not been given favourable consideration.”That is the secret of the success of Lagos State; the cooperation between the different arms of government and our unity of purpose to make life better for all our people.”From the inception of this administration, we focused our attention on Nine core Function Groups which are a reflection of our priorities and the needs assessments of the Citizenry. These areas include Security, Transport / Traffic management, Economy – including Tourism and Agriculture, Housing, Education, Health, Infrastructure – Social and Physical, Water, Wealth Creation – Skill Acquisition/Microfinance, E-Governance and Enhanced Capacity Building, Sustainable Environment and Smart City projects,” he said.In his comments, the Speaker of the House of Assembly, Rt. Hon Mudashiru Obasa said that the fallout of the presentation of the 2019 Budget by the state government has led to several insinuations in some quarters.Obasa, who was reacting to the presentation of the 2019 Budget by Governor Akinwunmi Ambode on Tuesday, stated that the fallout of the budget brawl has led to series of negative publications both on social media and in the print media.The Speaker stressed that the publication was being sponsored by “a faceless group calling themselves the Legislative Probity and Accountability (LPA) led by one Olu Fajana with its pseudonym.”He added that this started immediately the misunderstanding between the Executive and Legislative in respect of the Y2019 budget; which he said meant that such could not be ruled out to have emanated from the Executive.”A section of the media has even been mischievously misled into sensationally writing all manners of write-ups against this assembly.”Some of our friends in the media are personalizing the issue thereby misinforming the public. “The fact of the matter is that the issue is between one arm of government and another. What was at stake then was nothing but the matter of appropriation,” Obasa said.