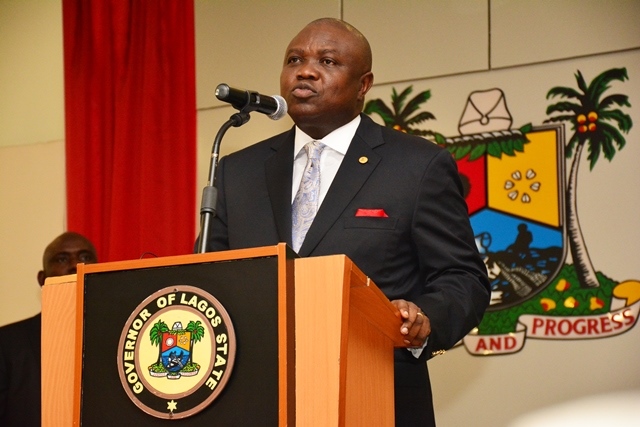 …Earmarks 56% To Capital Expenditure, 44% for Recurrent
… To Commence A-Meal-a-Day Programme in Public Schools Next Year
…Urges FG To Speed Up Special Status For Lagos

Lagos State Governor, Mr. Akinwunmi Ambode on Thursday presented the Year 2016 Budget proposal of N665.588billion to the House of Assembly, with a pledge that his administration will not only implement the budget faithfully, but also ensure that it works in the best interest of Lagosians.

The Governor who christened the 2016 budget “The Peoples Budget” said it is an improvement of 26 percent over the budgets of 2014 and 2015 respectively which stood at N489.6 Billion individually.

“The increase will enable our government to focus on the present challenges of security, traffic gridlock resolution including physical and social infrastructural development which has thrown up new challenges quite different from what we used to experience and have always known”, he said.

He said the 2016 budget which is the first full budget of the present administration will promote massive investment in Security, Transport and Traffic management, Physical and Social Infrastructural development and enhance job creation.

He said the intention of his government is to use the 2016 budget to strategically build new infrastructure, as well as maintain existing ones, adding that wealth and employment creation will also receive adequate attention in the course of the year.

Giving a breakdown of the budget figures, Governor Ambode put the Recurrent Expenditure at N278,909bn while Capital Expenditure stands at N383,678bn, explaining that the Capital to Recurrent ratio is 58:42 as against 51:49 in 2014 and 2015.

Governor Ambode also put the total revenue estimate for 2016 fiscal year at N542.873Billion saying the balance of N119.714billion will be funded through deficit financing constituting 0.41 percent of the state GDP based on 2016 budget alone and a cumulative debt to GDP ratio of about 3 percent.

Governor Ambode said that due to the falling oil prices, the budget is pegged on $38 dollar per barrel saying it was in line to maintain a conservative approach in estimating the Federal allocation for 2016.

“Fiscal Federalism and according Lagos a Special Status will benefit the State as we implore the Federal Government to look into this as soon as possible. As you are aware, the Federal Government still owes Lagos State over N50billion expended on federal roads in Lagos state. We look forward to an early refund to enable us utilize the fund on other infrastructure that require attention”, the Governor said.

Explaining some of the highlights of the Budget, Governor Ambode said the state government will commence the A-Meal- a-Day Programme in the state Public Primary Schools will from next year, adding that it will be done in collaboration with the Federal Government who will provide 60 percent of the funding, while the State Government will match it with 40 percent.

“This programme promises not only to improve the daily nutrition of our children, it will also create an economy of its own, with opportunities for job creation, income generation, poverty alleviation, and so on”.

“I am happy to inform you that in 2016 we will develop our e-Curriculum, leading to the distribution of Ibile Tablets to students in our public schools. This revolution, at the Secondary School level, will set a new standard in our educational system, and further enhance the knowledge of our children to enable them compete effectively with their peers in developed countries”, the Governor said.

On security, Governor Ambode while acknowledging that it was a major challenge that confronted the state within the first few months of his administration said the government adopted a multifaceted approach at tackling this challenge, just as he pledged to continue to support the security agencies in 2016.

On road infrastructure, the Governor said one of the assignments that his administration had embarked upon is to regularly inspect the state of the roads to ascertain their conditions and ensure that they are motorable, assuring that while ongoing projects will be given priority in the course of the year, new roads will be constructed across the length and breadth of the state.

Receiving the budget, Speaker of the House, Rt Hon. Mudashiru Obasa commended the governor for procuring security equipment to combat insecurity in the state, just as he assured that the budget proposal would be meticulously looked into by the House.

In his speech after the budget presentation by the governor, Speaker Mudashiru Obasa noted that Lagos has continued to be seen both within and outside the country as the very place where good governance is the norm and that this readily explains why the state is home to all Nigerians, having attained the enviable status of a mega city.

He also referred to the confirmation of the Civil Resource Development Documentation Centre, CIRDDOC, an independent, non-governmental organisation, which recently declared Lagos State as the third most transparent state in Nigeria in the area of budget performance and transparency.

“Here in Lagos State, the three tiers of government: the Legislature, Executive and Judiciary have always been striving to put our people first in all that we do.

“Despite their distinct status, these government institutions have continued to regularly collaborate to deliver the dividend of democracy and the very best for our dear state and the people.

“It is however pertinent to note that the very cordial relationship existing between this legislative House and the executive has not stopped us from performing our constitutionally assigned roles of exercising control over the state’s purse.

“This has obviously resulted in the First Class position that our dear state has attained in our country today, which makes Lagos the symbol of good governance.

“You will all agree with me that the responsiveness and readiness of this honourable House to pass pro-people and pro-development legislations is rightly on the course in giving Mr. Governor the much needed enabling environment to perform creditably well to the admiration of our people.

“This indeed is the confirmation that ‘behind every successful man there is a woman’, which in this case can be rewritten as: ‘behind every performing Governor there is a pro-active, pro-people and pro-development House of Assembly’.

While commending the governor for procuring security equipment to combat insecurity in the state, Obasa promised that the budget proposal would be meticulously looked into by the House.

“In treating this budget, we will not forget that we are trustees for the people. A lot has indeed been done in the area of job creation and economic empowerment of Lagosians. But there is a dire need to create more opportunities for our people; more jobs will definitely lead to greater economic growth.

“We need not be reminded that easy movement of people and goods is essential and important to the economy of a state. Therefore, we must continue to forge ahead,” the Speaker said urging the governor to continue to help the people of the state resolve gridlocks on the roads.