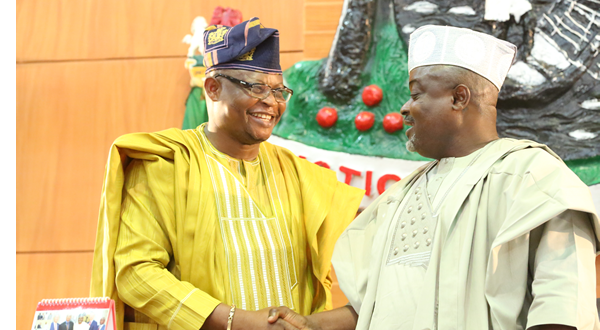 One out of the remaining two Peoples Democratic Party (PDP) member in the Lagos State House, Hon. Victor Akande representing Ojo 1 constituency has defected to the All Progressives Congress, APC.

Akande informed the House of his defection at plenary yesterday through a letter he addressed to the Speaker, Hon. Mudashiru Obasa and read by the Clerk of the Assembly, Mr. Azeez Sanni.

In the letter, Akande said he was defecting because of the factionalisation of PDP not just to two but four factions especially in Lagos State.

“My defection is to further continue support of adding legislative excellence to Governor Akinwunmi Ambode and the political leadership of the Speaker of the Lagos Assembly who has impacted on legislative standard in the state.

“PDP has fallen apart and the centre can no longer hold so I have chosen to follow the stable APC. I thank PDP for giving me the political platform to showcase myself. I also thank my constituents and traditional rulers in my constituency for their support. I will continue to give them better representation and for me this is an home coming”, Akande said.

Acknowledging the letter after he was given the chànce to speak, Akande who described himself as the last PDP man standing in the Lagos Assembly because “Markafi has since told his supporters to move over to the Labour party”, said he moved to APC with the blessings of his people from Ojo 1 constituency, royal fathers and all indigenes and non indigenes of the constiruency.

“I consulted widely before arriving at the decision to dump PDP for APC. I hereby shed the garb of PDP and I want to now be clothed with the APC garb”, Akande said.

Congratulating Akande for the bold decision, his counterpart from Ojo 2 constituency, Hon. Lanre Ogunyemi said, “Akande has made our day in Ojo with this defection, because actually there is nothing more for him to do in the PDP than to move to the moving train of the APC.”

Also congratulating Akande, speaker Obasa rejoiced with his colleagues for their good nature which made all the defections possible. He also thanked Akande for coming on board the APC, “We know you are a man of integrity and we are sure that image will reflect in our party”, Obasa said.