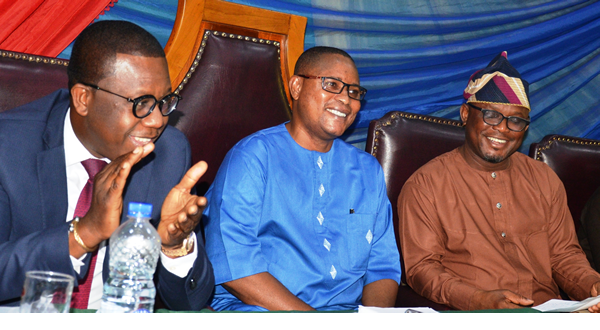 A bill that would lead to the strengthening of electricity generation in the state would soon be passed into law by the Lagos State House of Assembly.

The bill, which went through public hearing on Wednesday, was described by stakeholders as a good development for the state.

The Bill, which is entitled; “Lagos State Electric Power Sector Reform Bill” would accelerate embedded power supply in the state.

According to the Chairman of the Adhoc Committee on Energy and Natural Resources of the House, Hon. Folajimi Mohammed, the state has obtained a no-objection from the Federal Government to generate, distribute and transmit electricity through embedded power supply.

Mohammed stated in an interview with journalists that the power project would bring a new lease of life to the people of the state as there would be an uninterrupted power supply.

The Speaker of the House, Rt. Hon. Mudashiru Obasa, who was represented by the Deputy Speaker, Hon. Wasiu Sanni Eshinlokun, said in his welcome address that the project would have a multiplier effect on the economy of the state.

Reviewing the Bill, the Majority Leader of the House, Hon. Sanai Agunbiade emphasized its importance, adding that electricity is the bane of the development and growth of Nigeria.

A stakeholder at the Public Hearing, Mr. Aina Adeyemi of Adeyemi Aina & Co, advised that the law should address the issue of illegal connection and diversion of electricity.

“Even some rich people and others remove their air conditioners and other devices from the meter and connect it to the pole directly. This leads to 28% losses for distribution company.

“The state government should partner with meter product companies on the project. There should be a special court and police for energy offenders as it is done in a country like Egypt,” he said.

The state Commissioner for Energy and Natural Resources, Hon. Wale Oluwo stated that the bill was put together to provide a legal framework to make the project a law of the state.

Oluwo added that the state government plans to provide power for the state on a sustainable basis.

The Commissioner emphasized that embedded power is fairly strange to the state, but that it would achieve it’s aim on the long run.

“We used to provide electricity to power government agencies. Now, we want to power private homes and offices. We are planning to generate electricity and pass to EKO Distribution Company and Ikeja DISCO.

“The Bill has 45 parts, we will ensure that power gets to the people. “We have not had good electricity in Nigeria for 50 years. We will help the DISCOs to meter everybody and stop estimation. Electricity would be on pre- paid basis and people would either pay through recharge card or online.

“There would be power rangers and mobile courts to deal with offenders with the approval of the state assembly,” he said.

When passed into law, the Bill would facilitate the development and management of sustainable power supply in the state.

It would provide support to the Nigerian Electricity Regulatory Commission in the enforcement of its regulatory activities.

The state Ministry of Energy is expected to perform oversight functions for IBILE Oil and Gas Corporation, Lagos State Electricity Board and Lagos State Embedded Power Commission, according to the Bill.

It also gives the ministry the power to be responsible for the initiation, formulation and co ordination of power sector policies and programmes of the state.

“It shall coordinate and supervise Independent Power Project in the state, and perform any other function as may be assigned to the Ministry by the Governor,” the bill stated.

The bill also empowers the state Ministry of Energy to collaborate with Federal, State, Energy and Electric power related Agencies to promote and support investment in electricity power projects within the state.

It also provides for the establishment of the Lagos State Embedded Power Commission.

The commission is expected to collaborate with relevant Federal Agencies, ministries, departments, regulators and the Distribution Companies with respect to the development of electric power generation and distribution in the state.

“Subject to relevant laws and in collaboration with NERC, promote competitive, fair and efficient market practice within the electric power sector in the state.

“Liase and cooperate with NERC, ensure the implementation of cost reflective tariffs for all projects under the embedded power scheme, which will be structured in line with the methodology approved by NERC,” the bill read.