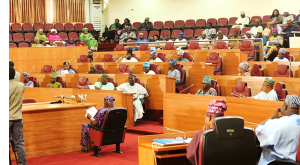 The Lagos State House of Assembly has urged the Commissioner of Police in the state, Mr. Zubairu Muazu to curtail the activities of cultist members in Ikorodu Area of the state.
The House also agreed to write a congratulatory letter to the new Governor of the state, Mr. Babajide Olusola Sanwoolu.
The issues surrounding gang war in Ikorodu followed an Urgent Matter of Public Importance raised by the Majority Leader of the House, Hon. Sanai Agunbiade during plenary on Monday 3rd June, 2019.
Agunbiade had informed the House that the gang war by cultists in Ikorodu Constituency 1 of the state was affecting the peace of the area.
He stated that the gang war among rival cults members in Ikorodu has made life unbearable for the people of the area, saying that it had led to several deaths in the area.
The Majority Leader added that the rampaging cult members have turned Ikorodu to a theatre of war.
“Once it is 6 pm, people in Ikorodu Constituency 1 comprising Ikorodu North and Central areas of the state would be afraid of going about their normal businesses.
“I want the House to call on the Commissioner of Police in the state to intervene in the violence going on in Ikorodu and control the activities of the cultists so that peace could return to the area,” he said.
In his response, the Speaker of the House, Rt. Hon. Mudashiru Obasa, stated that it was not out of place to call on the Commissioner of Police to arrest the situation in Ikorodu area and return normalcy to the area.
Obasa then ordered the Clerk of the House, Mr. Azeez Sanni to write the Commissioner of Police to curtail the activities of the cult members in Ikorodu Area, and this was supported by all the members, who adopted it as the resolution of the House through a voice vote.
The Speaker further sought the support of the members of the House to write a congratulatory letter to Governor Babajide Olusola Sanwoolu to formally welcome him to the state.
He added that it was necessary for the House to welcome the Governor to the state since he had just resumed duty and wish him a successful tenure of office.