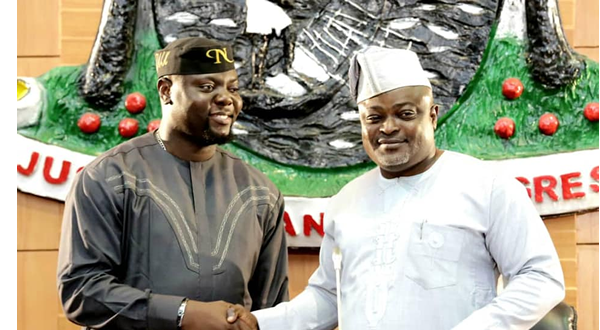 The only Peoples Democratic Party (PDP) member in the Lagos State House, Hon. Dipo Olorunrinu representing Amuwo-Odofin Constituency I on Monday defected to the All Progressives Congress, APC.

Olorunrinu lost his reelection bid to APC candidate, Mrs Mojisola Alli-Macaulay in March 9 House of Assembly election with just 278 votes and vowed not to challenge the result at the election tribunal.

The lawmaker informed the House of his defection at plenary through a letter titled: “Letter of Defection from PDP to APC” which he addressed to the Speaker, Mr Mudashiru Obasa and read by the Clerk of the Assembly, Mr Azeez Sanni.

The letter read in part: “I have been a young progressive-minded person and I have decided to realign with All Progressives Congress (APC) based on moving trend and party to reckon with in taking Lagos State to the next level.

“I will like to appreciate Mr Speaker for his continuous act of service to my constituency. This explains the magnanimity of Mr Speaker.” He further explained that “In 2015, we were eight and seven of us have defected but in all sincerity I made bold to say here that, I have never had any regret of still finding myself in the midst of this great administration.

“Permit me to say this in this hallowed chamber that the Peoples Democratic Party have been discovered by my humble self, as a party that is not to be reckoned with.

“That’s the more reason why I said to myself that we must start from here ans preach the good news of APC. I want to say a very big thank you to Mr Speaker for accepting me,” Olorunrinu said.

He apologised to the Speaker for his late decision.

According to Olorunrinu, he has spoken with his constituents, stakeholders of different calibres on the decision ” to join the moving train”.

The Speaker welcomed Olorunrinu to the ruling party and commended him for his decision while other APC lawmakers also received the defector into the party.

“I thank you for making the decision at last. We welcome you into our midst as members of APC in the House of Assembly.

“You have always been part of us save the fact that you refused to dump the leaking umbrella but today you have decided, I welcome you on behalf of our party.

“I want to thank you for lending your voice to what have been our position from quite sometime that the best party in Nigeria today is APC and there is nothing to gain from PDP. For realising this, I congratulate you.

“Distinguished colleagues, we now 40 members who are members of APC. Thank you for joining us,” Obasa said.
It would be recalled that eight lawmakers were elected into the 40-member Lagos Assembly in 2015 general elections but seven defected into the ruling party in 2017.

While six of the lawmakers defected on Feb.16, 2017 the seventh, Akande moved on July 10 same year all citing the achievements of Gov. Akinwunmi Ambode and the leadership quality of Obasa.

The candidates of APC won the entire 40 seats in the House of Assembly during the 2019 poll, unlike in 2015 general elections when PDP clinched eight seats.