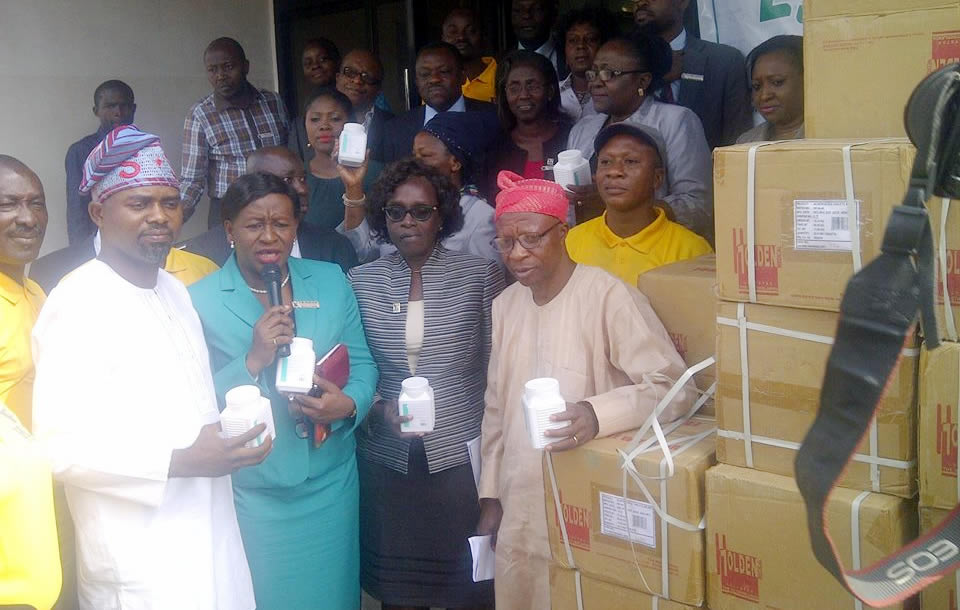 The representative of Alimosho Constituency 1 in the Assembly, Hon. Bisi Yusuf on Monday morning donated 2,000 bottles of Albendazole containing one million tablets to the state government through the Ministry of Information.

The tablets, according to the lawmaker, would help the state in the deworming of 5,000 children in the state.

Making the presentation to the Permanent Secretary of the ministry, Dr. Modele Osunkiyesi, who represented Dr. Jide Idris, the state Commissioner for Health, Yusuff, who noted that the drugs were donated by Vitamin Angels, a United States based company, added that the donation was done through his Prince of Hope Foundation.

The lawmaker, who chairs the Committee on Public Accounts for Local Government, said through the foundation, he had organised optical services for his constituents and had given out free medicated glasses.

Part of the task of the foundation, Hon. Yusuf said, is to raise the standard of living of his constituency though encouraging the people to save as well as assisting in giving free-interest loans.

He said the foundation had also distributed cartons of vitamin A to health centres throughout the constituency adding that the foundation decided to extend the gesture to the state government to augment its focus on the well-being of the residents.

“The journey started three years ago when I came in contact with Vitamin Angels and then they donated Vitamin A to my foundation which I in turn donated to all the public health centres in the four Local Council Development Areas in my constituency.

“Prince of Hope Foundation was born out of my passion for youths, children and mothers. Today, we have a co-operative society giving financial succour to my constituents, empowerment programmes and training for unemployed youths to give them hope and a sense of belonging.

“I am elated today as a legislator in the Lagos State House of Assembly to support the healthy living of over 500,000 children in Lagos State through this donation of 2,000 bottles of Albendazole. I am optimistic that this collaboration will be a continuous one.

“This memorable event of today will not have been possible if not for the tireless efforts of the Country Representative of Vitamin Angels, Ms. Abiola Akanni,” he said adding that the foundation would continue to collaborate with the state government and donor agencies both within and outside Nigeria.

“Also, for the past five years, I have organised free medical mission programme for my constituents featuring eye screening and distribution of free eye glasses, diabetes screening and provision of free drugs, malaria screening and drugs, dental screening, as well as HIV screening,” he said noting that the 2015 edition of the programme would commence Tuesday.

He pleaded with the government to ensure that the drugs actually get to those who need them.

While commending the Omu Aran prince for the gesture, Dr. Osunkiyesi reeled out startling statistics emphasising the danger children face in the country and in most parts of the world.

She said the donation was timely in view of the government’s focus on health and that the state had received accolade especially concerning its health reform.

Speaking at the event, the chairman,House Committee on Health, Segun Olulade, expressed excitement over the donation saying the tablets would assist the government reach out to some parts of the state.

“If there is any way to serve humanity, this is one major way. I want to use this opportunity to call on other political office holders to emulate what my brother has done today,” he said while promising that his own political structure, the Eleniyan Cares, would do same soon.

He also promised that the drugs would be channeled to the appropriate quarters so that children benefit from the scheme.