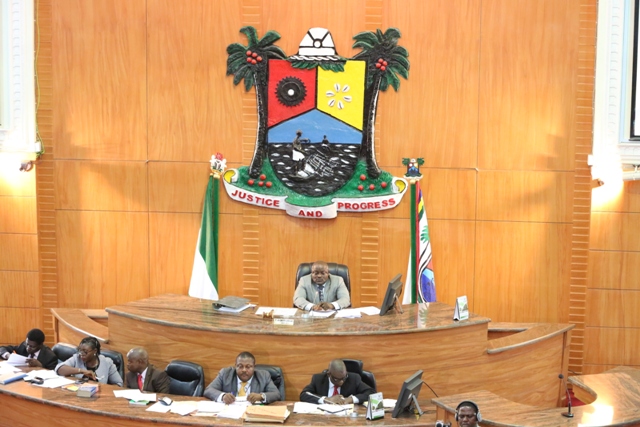 budget’s request of the State Governor, Mr. Akinwunmi Ambode to the tune of N25.028bn.

Ambode had requested to re-order the 2017 budget to the tune of N42..028bn but after taken the report of the Ad-Hoc committee headed by the acting Chairman, Hon. Rotimi Olowo, members slashed the request by N17bn due to insufficient information.

The key components of budget 2017 was recurrent expenditure N300.535billion while N512.464billion be dedicated to capital expenditure representing a Capital/Recurrent ratio of 63 percent to 37 percent.

With this passage, the 2017 budget stands at N494.447bn for capital expenditure while recurrent expenditure is now N301.551bn while the N17bn remaining was stepped down.

The request to re-order the Paris Club refund loan of N17bn to address the challenge of transportation in the State was stepped down as members were not satisfied with the information provided by the MDAs.

Olowo had explained earlier that there was need to pass the review of the budget as requested by the Governor in order to address the challenges of transportation, flooding and insecurity.

While leading the debate, Hon. Oluwafunmilayo Tejuoso stated that “there are some grey areas that need to be addressed before passing the budget. There was no enough clarification. As Lagos State House of Assembly, we should be careful; we are concerned about transportation however if they could not give enough information on the issue, it should be thoroughly looked before passing it.”

Also, Hon. Saka Fafunmi pointed out that the request to access funds meant for Lagos State University (LASU) for accreditation in 2016 and 2017 was not clear enough.

He argued that since 2016 budget estimate had lapsed, how would the fund be accessed to take care of the prevoios accreditation.

While supporting his colleagues, Hon. Olanrewaju Ogunyemi stated that since the MDAs had promised to furnish the House with full details of information requested, “I think the 17 billion naira can be held back. The 2017 budget is gradually rounded up, it can be incorporated into the 2018 budget

Hon Bisi Yusuff said, “Since details information were not provided, there is need to get the fundamentals correctly. It is not Mr. Governor but those who are saddled with responsibilities.”

The Speaker, Rt. Hon. Mudashiru Obasa said the Governor should be commended for having the foresight to utilize the Paris fund judiciously.

According to him, “I think we should commend the Governor and his team for utilizing the Paris Fund for ease of Lagosians. We are all aware of what is happening in some States where the money are used to pay salaries and son other States they could not account for it.

“We are willing collaborators with the Governor to do what will be of good to Lagosians. Since there is need fr clarification, we will drop that leg on the recommendations.’