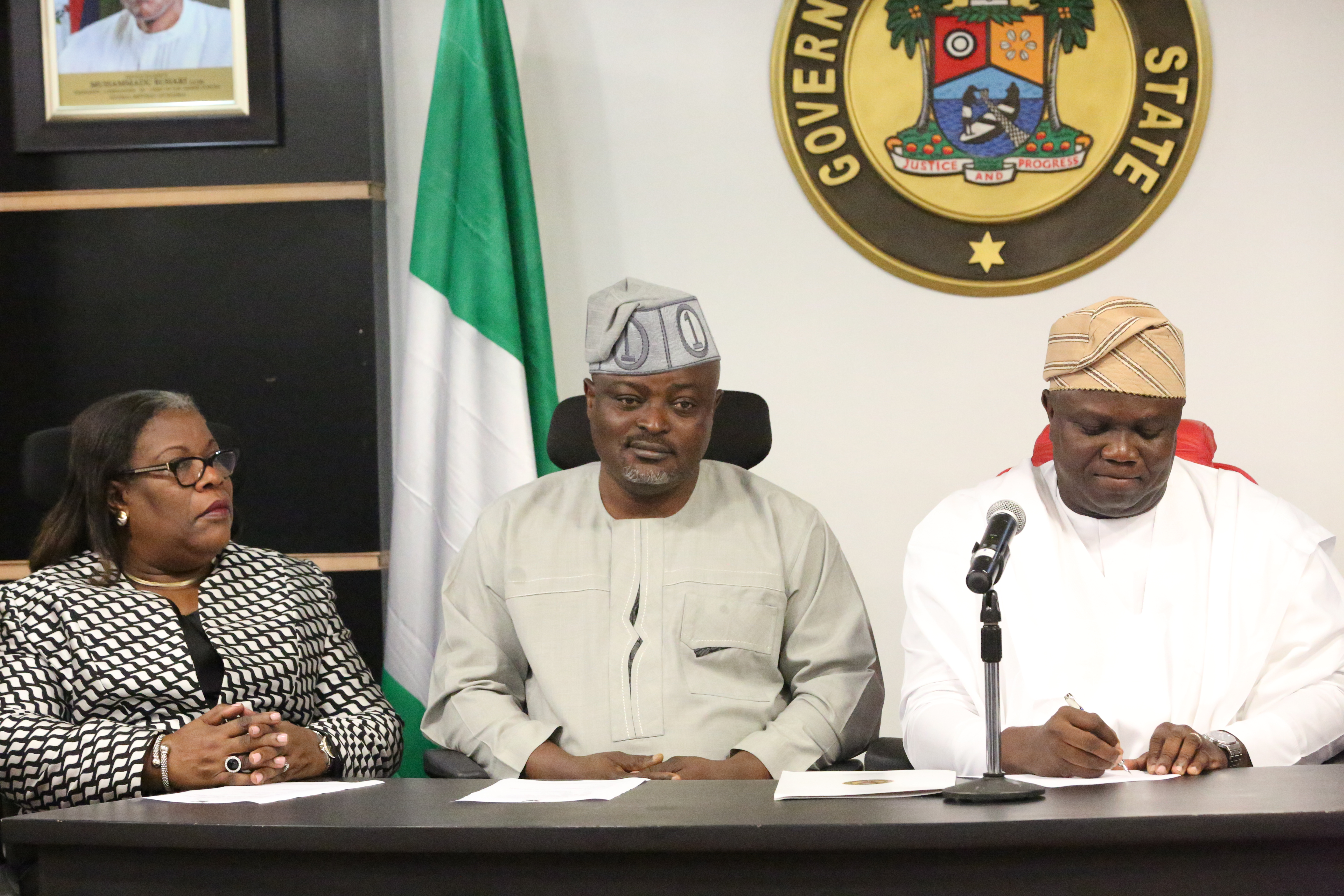 It was praises and commendations galore for the Lagos State House of Assembly on Monday, August 15, 2016, as the state Governor, Mr Akinwunmi Ambode signed two major bills passed by the House into law.
The Speaker of the House, Rt. Hon. Mudashiru Obasa was among guests at the signing ceremony.
The two bills, which are private member bills sponsored by the Speaker of the House are: a law to establish the Lagos State Neighbourhood Safety Agency for the Regulations and Control of Neighbourhood Safety Corps Activities and for Connected purposes; and a law to Prohibit Forceful Entry and Illegal Occupation of Landed Properties, Violent and Fraudulent Conduct in Relation to Landed Properties in Lagos State and for Connected Purposes.
Speaking at the event in the State House Monday on the new laws, the Speaker Obasa expressed utmost fulfilment in seeing the bills finally passed into law.
Rt. Hon. Obasa said that the security situation in the country calls for concerted efforts at putting in place structures to fight crime at all time.
Obasa gave an insight to why he came up with these bills. In his words, “the Lagos State Neighbourhood Safety Agency will control the activities of vigilante groups in the state and this will enable a uniformed and controlled performance by these groups’’.
He stated further that the vigilante groups will collaborate with the Police in combating crimes.
“The vigilante groups will be guided by the rules and regulations of the agency and will not go contrary to the provisions and stipulations provided in the law establishing the supervising agency.
“It is therefore imperative that all illegal activities detected by these vigilante groups will be reported to the Nigerian Police. The vigilante groups are not to take laws into their hands but to liaise with the Nigerian Police especially in the area of arrest.
“The Safety Corps Agency will be established in all local governments and local council development areas in the state. For now it will be the alternative to state police as it will engender communal policing aimed at reducing crimes to the barest minimum,” the Speaker said.
On ‘’the Law to prohibit forceful entry and illegal occupation of landed properties’’, Rt.Hon. Mudashiru Obasa said that the incessant activities of hoodlums popularly called Omo Onile or Ajagungbale prompted a great need to bring sanity to occupation of landed properties in Lagos State.
He said ‘’ the overwhelming activities of these hoodlums have given Lagos a bad name when it comes to land and property acquisitions’’.
Obasa said that firm measures are now put in place to curb these illegal activities through the enactment of the law.
The Governor of Lagos state, Akinwumi Ambode concurred with the Head of Legislature saying that the signing of the bills into law would engender socio-economic development and growth of the state by providing the needed enabling environment for investors to thrive.
Governor Ambode commended members of the state Assembly, especially Speaker Obasa for their pro activeness in ensuring the smooth passage of the bills. “The is a confirmation of the cordial working relationship existing among all arms of government in the state which has contributed to development and growth of the state,” the Governor said.
The state Commissioner for Justice and Attorney General, Adeniji Kazeem who gave general overview of the bills also commended the state Assembly for a job well done.
Apart from Obasa and Ambode, also present at the event were: the Chief Judge of the state, Justice Funmilayo Atilade; the Chairman of the Lagos Assembly on Lands, Hon. Sikiru Adebayo Osinowo; his Information, Strategy and Security counterpart, Hon. Tunde Buraimo; the Chairman of the Governor’s Advisory Team, Professor Adebayo Williams; members of the state executive council, executive; members of the Ikeja branch of the Nigeria Bar Association (NBA); and captains of industries among others.