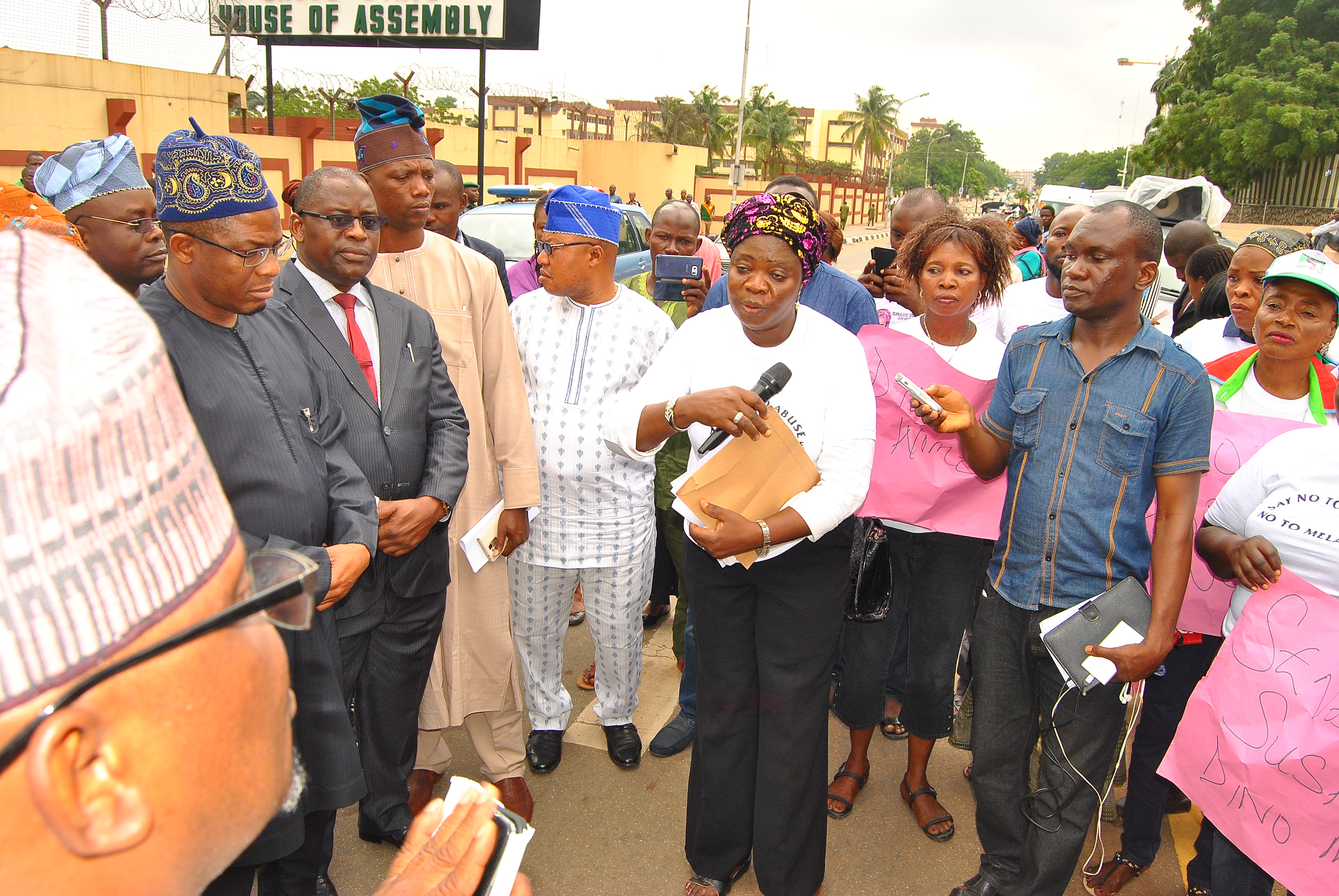 A group, the Concern Group of Lagos, made up of Lagosians from the three Senatorial Districts in the state protested at the Lagos State House of Assembly on Monday, July 18, 2016 to register their displeasure over the disrespect of Senator Dino Melaiye to Senator Oluremi Tinubu at an executive session of the senate on Tuesday, July 12, 2016.

The group presented a letter addressed to President Muhammadu Buhari on the attack and derogatory statements of Melaiye to Tinubu to the Deputy Speaker, Hon. Eshilokun Sanni, who represented the Speaker, Rt. Hon. Mudashiru Obasa for onward transmission to the President. The letter was signed by Mrs. Eunice Ogunleye.

The protesters carried varied placards with inscriptions like, “Melaiye, senate is not your father’s house”, “Dino, leave Tinubu alone,” “Senate should investigate Dino Melaye,” “Remi Tinubu is our choice,” etc.

The group expressed sadness and concern over what it described as “the shocking event of Tuesday 12 July, 2016” when Melaiye launched a “derogatory attack” against Tinubu, saying “we condemn in totality Dino Melaye’s attacks on our distinguished Senator Oluremi Tinubu.”

The group described Melaiye’s action at the executive session as “condemnable, disgraceful, disgusting, irritating, shameful, and most embarrassing to the collective psyche of not only the women folk but to the entire nation as evidenced from the avalanche of reactions this disgraceful act has generated.”

According to the spokesperson of the group, Mrs. Eunice Ogunleye, by Melaiye’s action at the executive session, “he has exhibited convincingly that he lacks the poise, panache, fineness and minimum character to occupy a seat among sane, revered and distinguished men and women in the hallow chamber of the sacrosanct Nigeria Senate”.

She stated further that Melaye’s “uncouth and unguarded vituperations against Tinubu have not only brought unquantifiable shame to himself, Kogi West, but also to the senate and the entire country”.

Condemning Melaye’s ‘assault’ on Tinubu, the group called on him to tender unreserved public apology to the hallowed chamber of the senate and more importantly to Tinubu and the entire country which he has brought great shame.

Failure to do that within an acceptable frame of time, the group called on relevant authorities to expedite measures within the legal system against Melaye “not only to serve as deterrent to others, but also send strong signal to young people, so as not to see Melaye’s character as an ideal conduct in a sane and civilised society”.

Receiving the letter on behalf of the Speaker, the Deputy Speaker, Eshilokun commended the protesters for conducting themselves in a peaceful manner and promised that the letter would be delivered to the appropriate quarter.

He also promised that the issue would be discussed on the floor of the House.