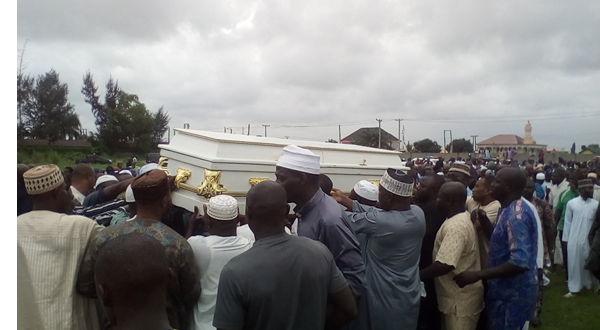 The remains of the late member of the Lagos State House of Assembly, Hon. Kazeem Ademola Alimi, who died on Tuesday, July 18 after a brief illness were buried amidst tears on Wednesday July 19.

Prayers for the deceased, who celebrated his 50th birthday on July 3rd was led by the Chairman Council Imams of Eti Osa, Afinni Yusuf at the Vaults and Gardens, Ahoyaya, Lagos, where the burial took place.

The burial ceremony was attended by lawmakers in the assembly, politicians, representatives of royal fathers, residents and others to see death as being inevitable and to do good at all times.

The body of the deceased was lowered into the grave at exactly 2:32pm

Yusuff said in his sermon that there is no king beside God and used the opportunity to pray for peace in the family of the deceased, Lagos State and in the country.

“Death is a necessary end and nothing happens without the knowledge of God,” he said, while praying for God’s protection for the wife and the children of the deceased.

The wife of the late lawmaker, Alhaja Adijat Modupe Alimi, described the death of her husband as painful, while expressing gratitude to God for a life well spent.

She said further during a brief interview with journalists that she would greatly miss her husband.

Speaker of the House, Rt. Hon. Mudashiru Obasa, who led other lawmakers to the burial, prayed that such a loss would not occur in the assembly again.

A statement by Musbau Razak, Chief Press Secretary to the Speaker of the Assembly, Rt. Hon. Mudashiru Obasa, confirmed that the late lawmaker died at the Lagos State University Teaching Hospital (LASUTH).

A two time lawmaker, Hon Alimi until his death, was the Chairman, House Committee on Local Government and Chieftancy Affairs.

He is survived by his wife and children.