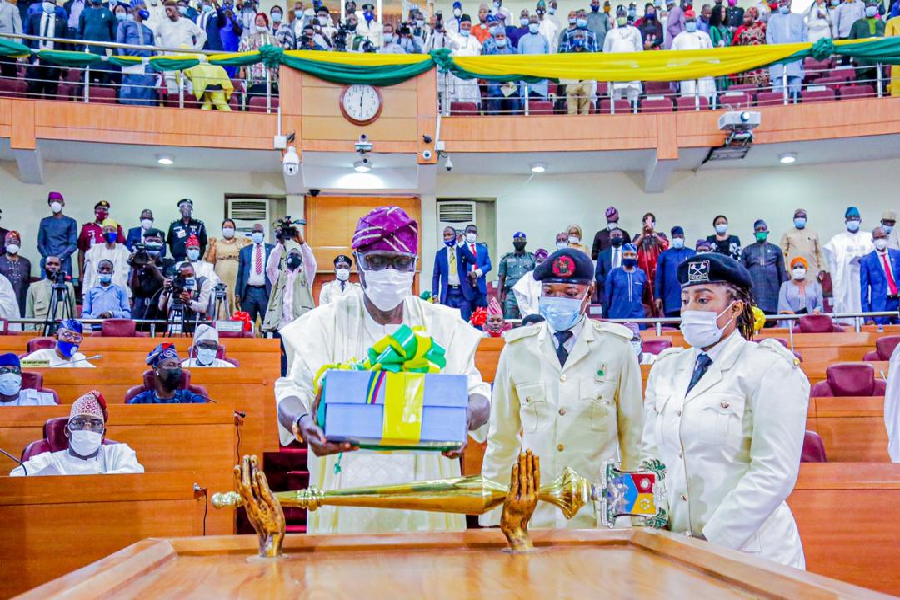 Speaker Mudashiru Obasa of the Lagos House of Assembly on Tuesday said the economy of the state was badly hit in 2020 by COVID-19 pandemic and the recent violence that escalated from the EndSARS protest.

Obasa said this when he received the 2021 budget estimate of N1,155,022,413,005 from Governor Babajide Sanwo-Olu at the chamber of the state Assembly.
According to Obasa, the anarchy, burning, and looting of businesses in the state ‘hit the economy with a blow beneath the belt’.

“You will agree with me that the effects of COVID-19 on the world economy cannot be over-emphasised. Right now, many people have been made unemployed by COVID-19. Some companies are still counting their losses.
“At the backdrop of the destruction of public and private properties and businesses in the wake of the #EndSARS protests, businesses have been counting their losses while economy experts have listed the immediate challenges the crises will throw-up against Nigeria’s struggling economy.

“Also, the replacement cost to Lagos State Government, which is the worst hit by the crises, is put at N1 trillion. More so, the overall cost to the private businesses has been put at several billions of US Dollars,” Obasa said.

The speaker, while expressing the readiness of the House to work with the executive arm of government to rebuild Lagos, however, lamented that the protest, embarked upon by youths who meant well for the country, was hijacked by hoodlums.

Obasa also advised that social media should be tools adopted by Nigerians to support the development of the country just as he added that the House would continue to support freedom of expression and be willing to interact with everyone including youths.

“When social media is employed in a ruthless manner such that causes disharmony, disaffection, and disintegration among family, friends and ethnic groups, it can no longer be considered to be beneficial to the society as a whole.

“For those who lost their lives and property, particularly the gallant Nigerian police, those whose businesses were destroyed, City Hall, Lagos judiciary, the TVC family, all the petty traders and affected banks and the residents of our dear state, I identify with you all at this trying period,” he said.

Governor Sanwo-Olu had christened the estimate “Budget of Rekindled Hope”.
He also expressed the urgent need to rebuild the state and its economy.