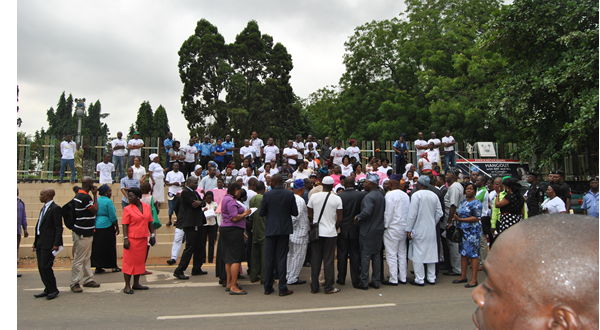 Scores of residents of Ibeju Lekki area of Lagos State staged a peaceful protest to the State House of Assembly on Tuesday 6 June alleging forceful take over of their land by landgrabbers.

Some of the placards of the protesters had inscriptions such as “Folami, bring peace and development, not death and destruction to your father’s land,” and “To defend our land and our people from Onibeju and Folami is a task that must be done.”

Others are “Ha, ha, ha, haha, Folami, Onibeju, you want to use us as slaves on our fatherland,” “If we remain silent, we would be guilty of complicity. We want peace, nothing more than peace at Oke-Ogun. Governor Ambode take note.”

A petition prepared for the embattled residents on the matter by their solicitor, Mr K.K. Suleiman, of the K.S. Karatu & Co. entitled: “Complaint against Mufutau Sefiu Olamiji as the purported Baale of ‘Okegun Ladeseso’ and subsequent attempts by the Commissioner for Local Governments and Chieftaincy Affairs to upgrade him to the status of a king.” reads in part:
“We are solicitors to Chief Samsideen Ogunkoya (the Ajagunbiada of Ibeju Land) and the people of Okegun Odofin in the Ibeju Lekki Local Government Area of Lagos State and on their joint instructions we write this petition to your Excellency in other to forestall total breakdown of law and order in Ibeju, Lagos State”.

“Chief Ismail Ogunkoya was duly nominated and appointed as the substantive Baale of Okegun Odofin in the Ibeju Lekki Local Government Area of Lagos State which position has been held by him with much support from our clients and with dignity till date.

In an earlier petition written by members of the community and addressed to the Lagos State House of Assembly, they had described themselves as “the descendants and the accredited representatives of Aladeseso family of the Aladeseso Chieftaincy Ruling House of Ibeju-Lekki.”

According to the petition, the problem dates back to 2013, when the said Mufutau Olamiji allegedly went round the community to proclaim himself as the Basle of an Okegun-Ladeseso community, a community they insisted did not exist.

“We therefore herewith oppose, condemn and disregard his purported declaration and or appointment as a ruse and thus further condemned his parade, representation and publicity as the Basle of the Okegun-Ladeseso community,” they stated.

Addressing the press, Alhaji Lateef Folami, who led the protesters, said that they were in the Assembly in respect of Oke Ogun Odofin, and Ibeju Lekki.

He revealed that Ibeju Lekki had been existing for the past 535 years, and that they had 18 obas, who had been on the throne and left.

“We didn’t have Ajagun Gbale or people taking other people’s land. But, for the past seven years, we have been facing challenges in the area. I am from Jinadu Bakare Family. We have expanse of land at Oke Ogun, Odofin.

“In Ibeju Lekki, we only know two Oke Ogun, Oke Ogun Odofin, and Oke Madagbayon; there was nothing like Oke Ogun Aladeseso in Ibeju Lekki.

Folami said further that they saw a caterpillar on their land and that they challenged the driver.

He stated that they later heard gun shots from nowhere and ran for their dear lives.

The protesters then appealed to the Speaker of the House of Assembly, Rt. Hon. Mudashiru Obasa and Governor Akinwunmi Ambode to come to their aid.

Folami alleged that the landgrabbers brought one Mufutau Olamiji as the ‘baale’ of the area and called it Oke-Ogun Aladeseso.

“But in Ibeju Lekki and Lagos State, there is nothing like that. The Commissioner for Local Government and Community Affairs, Hon. Alhaji Oloruntele Folami is my elder brother. They tried to draw him to their side.

“We are the same family with the commissioner and even from the same local government. He should have asked questions before giving them papers. He was saying that the oba lured him into it.

“We later saw another paper that Mufutau Olamiji would be made a king. He is not from that area, he is from Magbon. He has been a baale in the area for two years.

“We now have two baales in the same area that is not up to four or five kilometres apart. Both of them have been gazetted, which is the dangerous aspect of it.

“We want the Lagos State House of Assembly to set up a panel and look into the matter. We are sitting on a keg of gun powder. The matter is in court and under a panel headed by Hon. Funmilayo Tejuosho. They promised to get back to us but they have not done so since we met with them,” he said.

Addressing the protesters, the Speaker of the Assembly Rt. Hon. Mudashiru Obama urged them to allow the Assembly complete it’s work on the matter.

Obasa, who was represented by the Majority Leader of the House, Hon. Sanai Agunbiade said that a situation, where a wrong person was installed would be investigated.

Agunbiade urged the protesters to be patient saying that the house receive so many petitions daily and that the matter has to be thoroughly debated at plenary even when the committee handling it has completed its work.

“All of these would not make the committee dispense with the petition as quickly as the petitioners want. But ultimately the whole house would look at the petitions.

“We have to painstakingly look at the petition and the outcome is always acceptable to the petitioners,” he said.