INEC Lagos issues certificates of return to Obasa, 39 Others 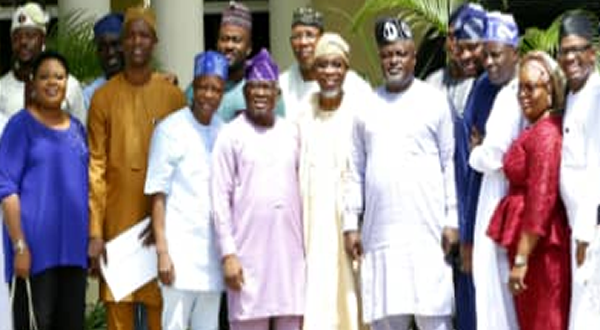 INEC Lagos issues certificates of return to Obasa, 39 Others

Independent National Electoral Commission (INEC) in Lagos, today, issued certificates of return to the Speaker of Lagos State House of Assembly, Rt(Hon) Mudashiru Obasa and 39 Lawmakers-Elect at the headquarters in Yaba.

In his welcome address, the Administrative Secretary, Mr Ashade Adelani, tasked the lawmakers-elect on massive delivery of dividends of democracy to their constituents, adding that out of 640 candidates that contested the House of Assembly elections in March 9th, only 40 emerged winners.

In his comments, the Resident Electoral Commissioner, INEC Lagos, Mr Sam Olumekun, described the event as a special one saying that Nigeria had experienced 20years of uninterrupted democratic practice.

” Today is special because we are experiencing 20years of uninterrupted democratic practice in Nigeria.. it is also important because the election that brought you into office was peaceful and was adjudged so by the international observers”

Olumekun eulogised the various security agencies for their roles in the conduct of the general elections in the state, thereby urging the lawmakers-elect to enact laws that would improve the lives of Lagosians.

He, however, urged the party leaders to intensify their efforts in mobilising the electorate and their members to actively participate in elections, lamenting on the low turnout of voters during last general elections in the state.

However, the lawmaker-elect and Speaker of Lagos State House of Assembly, Rt(Hon) Mudashiru Obasa, in his comment, stated that this was his fifth term of coming to INEC to collect certificate of return, saying that the lawmakers -elect had listened to the advice of the REC and that they would represent their constituents genuinely.

Obasa stated that they are concerned about the people and that they would not forget the interest of the people in their legislative duties.

He added ” We have the interest of our people and that is the purpose we are going to the parliament. The 8th Assembly had done tremendously well and the 9th Assembly will not be different as the ear and mouth of the people”

Speaking on the cost of conducting elections in the country, Obasa suggested ” The Nation needs to be more prudent by looking for a more convenient and less expensive process that will be acceptable and credible.

Obasa commended the National Leadership of APC, Asiwaju Bola Tinubu, Governor’s Advisory Council (GAC) members and other stakeholders who contributed to ensure that the 40 seats were won by candidates of the party.

He, however, called for more acceptable, convenient, prudent, truthful and protective electoral process, calling on the National Assembly to embark on necessary amendment that would be beneficial to the general public.