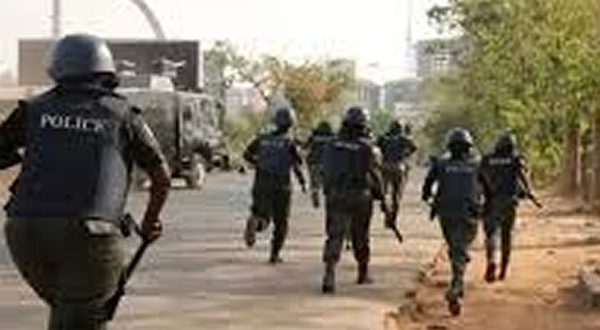 Worried by the spates of interference by the Nigeria Police in the activities of State Houses of Assembly, the Lagos State House of Assembly has urged the President, Muhammadu Buhari to direct the Inspector General of Police, Ibrahim Idris to call his men to order.
The House also commended the Chief Judge of Benue State, Justice Aondover Ka’kaan for having the courage to give a landmark judgement on the sanctity of the legislative body.
The resolution followed a motion moved by the Chief Whip of the House, Hon. Rotimi Abiru, who spoke under Matters of Urgent Public Importance, lamented the “desecration of the legislature by the police and executive arm across the country.”
According to Abiru, “Some people are interfering with the proceedings of the Houses of Assemblies. It is clear in the constitution that the the three arms of governments are interdependent.
“We see the involvement of security forces. What happened in Benue is commendable. The Speaker was impeached but there was crisis but the Chief Judge of the state has ruled that the judiciary has no power to interfere in the business of legislature.
“The role of the Nigerian police is to maintain peace and not to shut down the parliament. The police are very quick in taking sides,” Abiru submitted.
The Speaker of the House, Rt. Hon. Mudashiru Obasa stated, “I also join you to commend the Chief Judge, who made the pronouncement. Since 1999, we have seen shutting down of parliaments. We should remind the police that no arm of government is above the other. The police have no power to close down parliament.
“The developed world had also passed through such process, but they had the citizens that rose to defend the parliaments. When any House is being shut down, we should have people in such states that would sue the commissioners,” Obasa said.
The Speaker however cautioned his colleagues in taking legislative business very serious, saying “though anyone could emerge the Speaker among members but it should be in accordance to the rule.”
While also commending the Benue Chief Judge, Hon. Segun Olulade reiterated that “it is wrong for any arm of government to impede on the other. When you shut down legislature, you have shut down the people. Members of parliaments should be allowed to resolve their differences.”
Hon. Rotimi Olowo pointed out that “what is happening in Benue and Anambra States is executive recklessness. We are not in military autocracy. When you shut down an arm of government, it is ultra vires. We need to write the IG to put a stop to this.”
On his part, Hon. Abiodun Tobun maintained that sovereignty belongs to the people, adding that “the people have willingly surrendered their sovereignty to the lawmakers, but what we have witnessed is that they try to intimidate the parliamentarians. When police are coming into the chambers, that is the work of the fifth columnists.”
Hon. Funmilayo Tejuoso stated that the legislature is the voice of the people, saying that the police and the executive must be careful in jumping to other people’s jurisdiction.