IT IS TIME TO HAVE STATE POLICE – LAGOS ASSEMBLY TELLS BUHARI, NATIONAL ASSEMBLY OVER ENDSARS VIOLENCE; SETS UP COMMITTEE TO MEET VICTIMS, REVIEW SITUATION; COMMISERATES WITH GOVERNOR SANWO-OLU, OTHERS 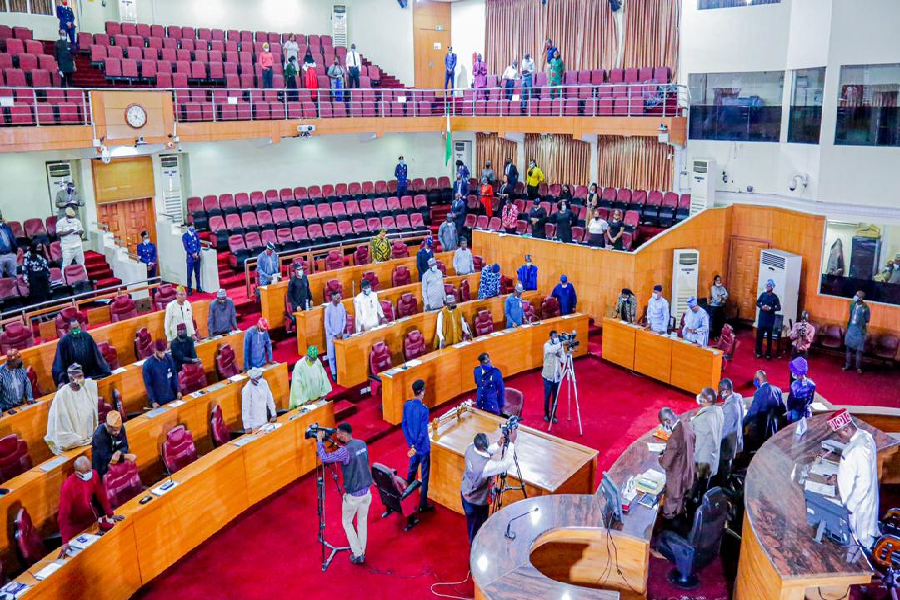 IT IS TIME TO HAVE STATE POLICE – LAGOS ASSEMBLY TELLS BUHARI, NATIONAL ASSEMBLY OVER ENDSARS VIOLENCE; SETS UP COMMITTEE TO MEET VICTIMS, REVIEW SITUATION; COMMISERATES WITH GOVERNOR SANWO-OLU, OTHERS

The Lagos State House of Assembly on Monday renewed its clamour for the establishment of a state policing system in the aftermath of the carnage visited on the state recently.

The members, during a special sitting to review the violence that resulted in the attack on government infrastructure, the palace of the Oba of Lagos, HRM Rilwan Akiolu, and private establishments in the state, resolved to call on President Muhammadu Buhari and the National Assembly to give a nod to this demand.

The lawmakers also set up an ad-hoc committee chaired by the Deputy Speaker, Hon. Wasiu Eshilokun-Sanni, to relate with the victims of the attacks as they promised to work with the executive arm in rebuilding the state.

In his address to his colleagues, the Speaker of the House, Rt. Hon. Mudashiru Obasa, urged the government to empower and strengthen the Neighbourhood Safety Corps with all the paraphernalia of security outfits.
“I think if there is any time for our agitation for state police to be given utmost attention, it is now,” Obasa said.

He lamented how the protest, which started peacefully, later took a life of its own even when the House and the governor of the state, Mr. Babajide Sanwo-Olu, were working tirelessly on the demands raised by the aggrieved youths.

“It is regrettable, however, to learn that the peaceful protest was not only hijacked by unpatriotic elements who don’t mean well for the populace, but also brutally ended with the use of force that took place at Lekki Toll Gate on October 20,” he said.

The Speaker also mentioned some of the areas visited by him and a team of lawmakers adding: “The level of ruins in all these places mentioned is beyond imagination.

“Let me use this medium to remind us that Lagos state, being a mini-Nigeria, has always maintained a very respected place in the country as well in Africa. Lagos is a state that harbours everyone notwithstanding their nativity, political or religious affiliation.

“May I let us know that it will not do us any good to continue in this act of careless destruction and bringing hardship on everyone around us. In fact, looting government and private properties will lead to more hardships for us.”

He appealed to the residents to support the move for a better Lagos and urged the government to fish out those involved in the arson and looting of businesses.

He also pleaded with residents to limit the influence of social media on their lives and activities as he asked them to verify every information that comes to them in the light of fake news.

Obasa commiserated with the families of those who lost loved ones during the period, sympathized with the judiciary and law enforcement officers and expressed pain at the way the palace of Oba Akiolu was vandalized.

“I will like to bring it to our notice that a committee has already been set up that will review cases of those who lost their belongings and wares with a view to supporting them by the government. I assure you all that this Assembly will join with the Executive in working out compensation modality for all victims,” he said.

Other lawmakers who spoke during the sitting recalled how the Speaker met with the protesters at midnight and made promises to them.

They also recalled how the Assembly held a special sitting a day after the meeting and made demands to the federal government.

The lawmakers endorsed the call for state police.