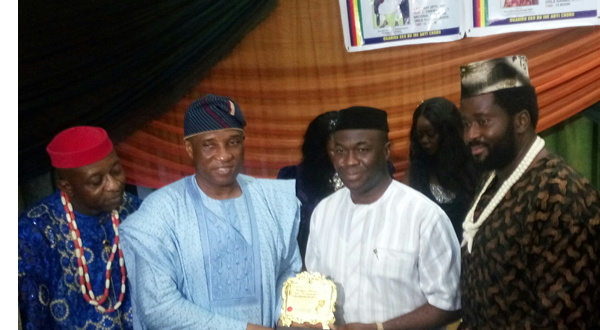 The Igbo Community in Lagos has honoured the Speaker of the Lagos State House of Assembly, Rt. Hon. Mudashiru Ajayi Obasa, in recognition of his outstanding contributions to the development of the state and the Igbo nation.

The prestigious recognition and visionary award for leadership was presented to Obasa at the Hall 1 of National Theatre, Iganmu, Lagos on Saturday, 27th May, 2017.

The Lagos speaker who was represented by his Chief of Staff, Mr Adewale Jafojo thanked the community for deeming it fit to honour his boss.

Delivering his good will message at the occasion, he acknowledged the contributions of the Igbo Community in the state since inception. “Since Lagos became a geographical entity 50 years ago following its creation as a state in 1957, the Igbo have become instrumental to the development of what is now the Centre of Excellence. Your community is so important to us because you have been part of the state’s development.

The chief host, Hon. Jude Idimogu who is representing Oshodi-Isolo 2 at the state assembly, commended the state governor, Mr Akinwunmi Ambode and the members of his cabinet for moving the state forward.

Idimogu praised Rt. Hon Obasa for his leadership quality style in the hallow chamber of the state assembly and Lagos in general.

He enjoined Lagosians to support the state assembly as they continue to pass people oriented laws.

Dignitaries at the event includes Secretary to the State Government, Mr Tunji Bello who represented the state governor and All Progressives Congress (APC) Publicity Secretary in the state, Mr Joe Igbokwe.