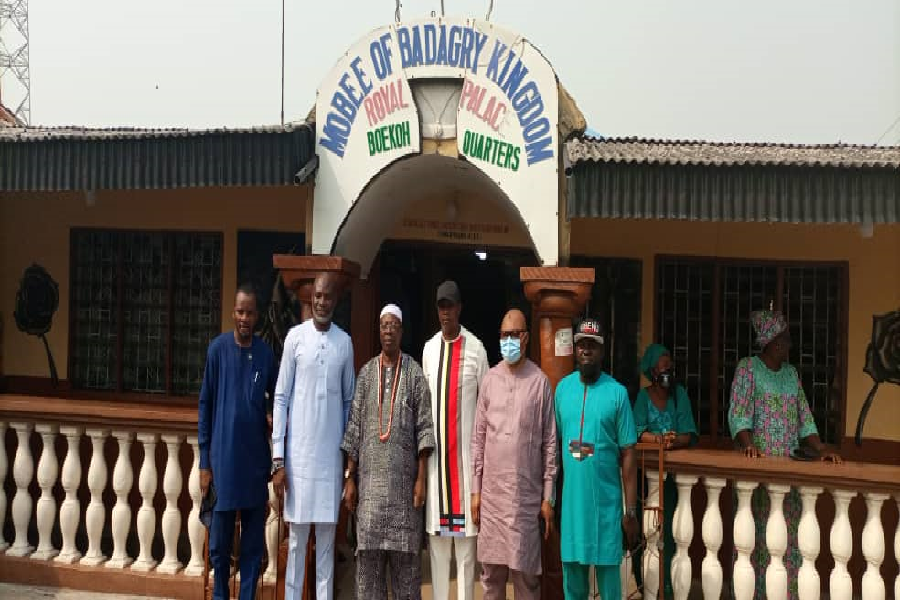 With the Lagos State House of Assembly’s purpose to review the heritage monuments and tourist attraction sites in the State, the Ad Hoc Committee on Tourism, Arts and Culture mandated for the charge progressed on an inspection tour through the 5 (five) IBILE divisions starting with Badagry on Thursday.

The Committee chaired by Hon. Fatai Oluwa was welcomed by the Ministry of Tourism Annex in Badagry and was taken to the Badagry Heritage Museum, Mobee Royal Family Slave Relics Museum, First Storey Building, Seriki Abass Compound, Badagry Slave Route popularly known as “Point of no return”, Palace of Oba Akran of Badagry among others.

At the Badagry Heritage Museum, the Committee met with the Head, Museum Curator, Mr. Peter Mesewaku who conveyed them around the Museum; discovering that the Museum whilst upgraded from its previous image, lacked many facilities, an operational website and more access to revenue generating arrangement.

Hon. Fatai Oluwa emphasised that the Ministry can perform optimally through the Heritage Museum if, “The Museum can encourage tourists to visit other government owned monument and attraction sites in Badagry, as well as enhance the use of the hall owned by the Museum by introducing shows and stage theatre performances enticing and creating awareness to people nationwide.”

Following the visit to the First Storey Building, Boekoh Quarters, the Committee met with the building Manager, Mr. Ezekieh Sotenji who gave a detailed descriptive history of the almost dilapidated structure, appealling that the building can no longer be maintained by the Anglican Church as there are many modifications to be made to uphold the historical heritage.

In response, the Committee alluded there needed to be a total rehabilitation of the building exhibiting its history whilst preserving it for many generations to come.

Visiting the monument identified as “the fisherman”, the Committee noted that the stature had to be situated with the intention of relaxation by tourists as well as an image of a fish as a symbol of occupation of the stature, while at the site of the fallen Agia tree indicated that a celebration of Christianity and Christmas which originated by the former White Slave masters on every September 24th since its inception in 1842 will attract crowd as well as tourists from all over thereby generating awareness and revenue for the State.

The tour also touched the Vlekete Slave Market, Posukoh Quarters which was where the Slaves were traded upon arrival to White Slave owners and also served as a Customary Court in the pre-colonial era, Hon. Apata Samson, Office of the Supervisor for Tourism and Environment, Badagry LGA who also welcomed the Committee revealed that the market also served as the site where the treaty to abolish Slavery was signed but however has been eaten up by various houses and buildings.

He also added that the building constructed in honour of the market is yet to be furnished nor commissioned by the government.

At the District Officer’s residence which was managed by the Ministry of Tourism and Ministry of Information and Strategy, the Committee discovered that it was locked up and unused by the State despite the structure being completed; however hoped that it would be renovated, equipped and ready to use with time.

The Committee visited the Mobee of Badagry, HRH Menu-Toyi II who urged the government while appreciating their effort to revive all abandoned projects started in Badagry.

Arriving at the Old palace of Oba Akran, the Committee noted that the structure is due for modification and renovation in order to avoid the total collapse of the derelict building.

Getting to the “Point of no return” Slave route which was a major Slave port after it was opened in 1473 during the Trans-Atlantic Slave Trade era was journeyed to on foot by the Committee through Gberefu Village; where the Committee also discovered the Spirit Attenuation Well, an ancient pause for water on the Slave route drank by the Slaves with the purpose of erasing their memory and turn them meek.

The Committee observed that the hectares of land in possession of by the government to establish a theatre village and several structures has been encroached on by residents; the Amphitheatre constructed by the beach un opened for use due to contractual issues from the contractor.

In review, the Committee resolve to call on the contractors in charge of the Amphitheatre as well as the Surveyor General to avail them with the Map Grid survey of the land owned by the state government in Gberefu Village.

Further inspection of monuments and tourist sites will continue to other divisions of the State in accordance with the decision of the Committee.

The visitation was embarked by the Members of the Committee; Hon. Fatai Oluwa, Hon. Nurudeen Solaja-Saka, Hon. Victor Akande, Hon. Rauf Age-Sulaiomn; Members from the Ministry of Tourism and the Committee’s Secretariat.