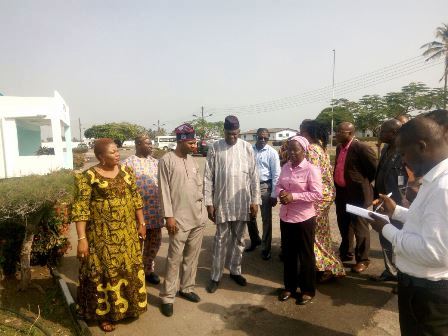 Lagos State House of Assembly Committee on Ethics, Protocol and Privileges has called for adequate maintenance of public assets in the state.

Chairman of the Committee who also doubles as the Chief Whip of the House, Hon. Rotimi Abiru, made the call during an inspection tour of some government facilities in Epe and Badagry areas of the State.

Hon. Abiru explained that there is need for adequate and routine maintenance of facilities so that these structures can stand the test of time.

He said, “As the Ministries, Departments and Agencies (MDAs) are preparing to defend their annual budget, the House is committed to scrutinize the budget in preparation of Y2017 budget for proper accountability, probity and fairness”.

According to him, the inspection of projects, which are under the supervision of the Office of the Chief of Staff became necessary in order to ascertain the level of compliance with money budgeted for the projects. He therefore advised the Office to ensure that these projects are properly maintained .

Hon. Olusegun Olulade, also a member of the Committee, speaking during the inspection of Ejirin VIP chalet said, “the chalet does not exhibit VIP status and there is need to upgrade the facilities and possible expand its chalet”.

Another Member of the Committee, Hon. Akeem Bello, the Minority Leader of the House, noted that Lagos is the Centre of Lagos Excellence and as such it must live up to its glory.

While commending the effort of the State Government in its plan to renovate some of these facilities, Hon. Mosunmola Sangodara, who is the Minority Whip stated that as Lagos is set to explore its tourism potentials, government-owned hospitality centres should be maintained and made available for fun seekers and tourists as this, she said, would boost our economy the more.