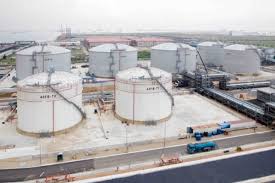 The Lagos State House of Assembly has called on the Nigeria National Petroleum Corporation ( NNPC) to relocate the tank farms in Apapa to a less congested area, saying that it is causing traffic logjam and endangering the lives of the residents.

Hon. Mojisola Miranda, who raised the issue under matter of urgent public importance on Thursday during plenary, said that the activities of the trailer drivers in Apapa are not only affecting traffic in the area, but that it has extended to other parts of the state.

Miranda, who is representing Apapa Constituency 1 in the assembly, added that the traffic jam is making life difficult for workers and school children in the area.

She urged the Assembly to invite the state’s acting Commissioner for Transport and the Managing Director of the Lagos State Traffic Management Authority (LASTMA) to brief the house on how they would handle the matter.

This was supported by the lawmaker representing Apapa Constituency 2, Hon. Olumuyiwa Jimoh.

Jimoh, who said that he had been having sleepless night on the matter, stressed that residents of the area have been coming to him on the issue and that it should be resolved once and for all.

The Speaker of the House, Rt. Hon. Mudashiru Obasa, emphasized that the House should not wait until the necessary officials were invited to brief them, but that necessary steps should be taken urgently to handle the situation.

“It is better we caution the trailer drivers to stop parking on the roads and bridges in the area. We will definitely call on the officials of LASTMA and Lagos State Safety Commission on the matter.

“We also have to call on the Federal Ministry of Works and Housing to provide alternative roads to motorists, while the roads in Tin Can Island were being repaired,” he said.

Obasa stated that the tank farms should be relocated from the area because, according to him, they were located in the area before the place became a densely populated area.

In his comment, Hon. Rotimi Olowo from Shomolu Constituency 1 stated that the activities of the trailer drivers were affecting the economy of the state.

Also commenting, Hon. Abiodun Tobun from Epe Constituency 1 wondered why the Federal Government that he said is collecting money in the ports was not doing the necessary things about the roads there.

Tobun added that the government could get a location close to Tin Can Island Port to park the trailers and that Lagos State should be allowed to control the ports.

Hon. Rasheed Makinde, in his contribution said that some of the trailers come from the eastern and northern parts of the country and that they disobey the laws of the state.

These views were supported by other lawmakers, who urged the House to urgently handle the matter, and the House adjourned sitting to Monday 25th September, 2017.