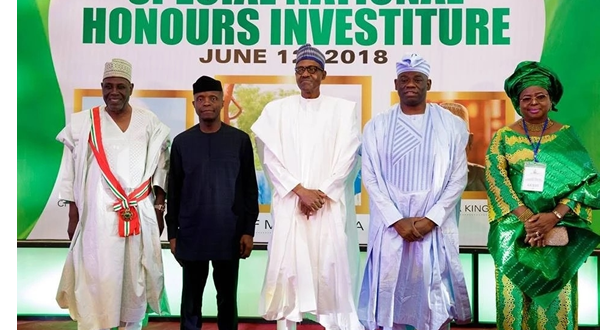 Lawmakers in the Lagos State House of Assembly have commended President Muhammadu Buhari for honouring the presumed winner of the June 12, 1993 Presidential Elections, the late Chief MKO Abiola.

Raising the issue as a matter of urgent public importance, Leader of the Assembly, Hon. Sanai Agunbiade said that it was gratifying that President Buhari recognised Abiola as a hero of democracy with an award of Grand Commander of the Federal Republic (GCFR) reserved for presidents of the country.

According to him, “President Buhari has crowned the agitations of the Lagos State House of Assembly over the years that the late Chief MKO Abiola should be recognized.

“We are glad with what President Buhari did on June 4, 2018. The President did what the presidents that have ruled Nigeria since 1999 failed to do, so we are glad that our dreams have finally been realised,” he said.

The Speaker of the Assembly, Rt. Hon. Mudashiru Obasa, in supporting the issue on behalf of other members of the Assembly, stated that the House had always been canvassing the recognition of Chief MKO Abiola other unsung heroes of democracy.

He said that it was worthy of note to commend President Muhammadu Buhari for the action, adding that he never expected Buhari to make such a move as a former military president, who later became a civilian president.

Obasa added that by recognising the winner of the June 12,1993 presidential election, Buhari has advanced the nation’s national value and promoted her national unity.

The Speaker then directed the Clerk of the House, Mr. Azeez Sanni to write a letter to President Muhammad Buhari to commend him for the action.

Moreover, the Chief Whip of the Assembly, Hon. Rotimi Abiru gave a report on the National Convention of the All Progressives Congress (APC), which held in Abuja on Saturday 23 and Sunday 24, June, 2018.

Abiru stated that most members of the Lagos State House of Assembly were at the convention and commended the leaders for its success.

The Speaker of the House, Rt. Hon. Mudashiru Obasa then directed the Clerk of the House, Mr. Azeez Sanni to write letters of congratulation to all the leaders of the party, while he commended it’s National Leader, Asiwaju Bola Ahmed Tinubu.

The House then adjourned to Friday 29, June 2018 by 2:00pm, when it would be marking it’s third anniversary with the nation’s Vice President, Professor Yemi Osinbajo and former speaker of the Federal House of Representatives, Rt. Hon. Ghali Umar Naa’ba as guests speakers.