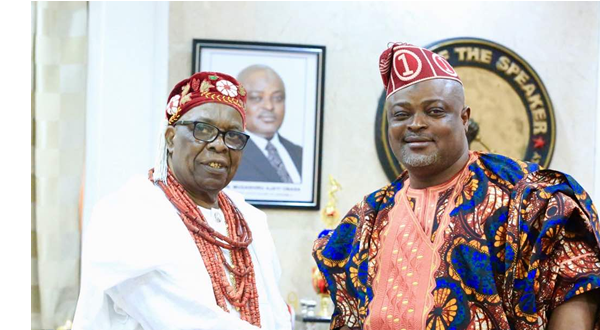 The paramount ruler of Ijesaland in Osun State, Oba Adekunle Aromolaran, on Thursday commended the Lagos State House of Assembly’s efforts to promote and preserve Yoruba language and culture.

Aromolaran, who gave the commendations while observing the plenary session in Yoruba, called on other Houses of Assembly in the southwestern part of Nigeria to take a cue from the parliament.

According to the first class ruler, who chided parents, schools and traditional chiefs for not encouraging Yoruba Language, said that children learn better in their native languages.

“The first thing I observed was that all proceedings were conducted in Yoruba Language and that struck me and it is strange to me.

“I was not surprised because I knew before I came that the Lagos State House of Assembly encourages our indigenous language.

“The bill passed by the House that made Yoruba language to be made compulsory in primary and secondary schools goes a long way to enhancing the language.

“Yoruba language is spoken in countries like Cuba, Brazil and some other European countries, but we are here looking down on our language as pupils in primary schools cannot speak their indigenous languages.

“Without understanding your indigenous language, you (a student) can hardly make progress in the other subjects.

“I appreciate what the entire Lagos House of Assembly is doing and also their respect for the traditional institutions,” the Oba said.

Oba Aromolaran added that he was moved the way every lawmaker eulogised Oba Rilwanu Akiolu, the Oba of Lagos as the latter celebrated his 15th anniversary of his coronation.

The paramount ruler, who noted that he had visited several legislative houses within and outside the country, said that the Lagos Assembly had no comparison, especially in Nigeria.

According to him, at least 90 per cent of traditional rulers in the country today are educated and that some of them were engineers, professors, accountants, legislators among others.

In his reactions, the Speaker of the House, Hon. Mudashiru Obasa, who expressed joy over the accolades, urged all Nigerians of Yoruba descents to support the promotion of the language.

Obasa said: “We have shown support that we should have strong belief in our traditional institution and to continue to promote our culture.

“So, with this accolades, we will continue to put in all efforts at ensuring that Lagos is moving forward”.

On lack of constitutional role for traditional institutions, Obasa said that the House would be part of the call for attention on the issue.

Also speaking, Hon. Tunde Braimoh, the Chairman, House Committee on Information and Strategy, who thanked Oba Aromolaran for his commendation, said that the accolades remained a challenge for the House to do better.

The House, which conducts its Thursday’s proceedings in Yoruba language, adjourned its plenary session to June 4.