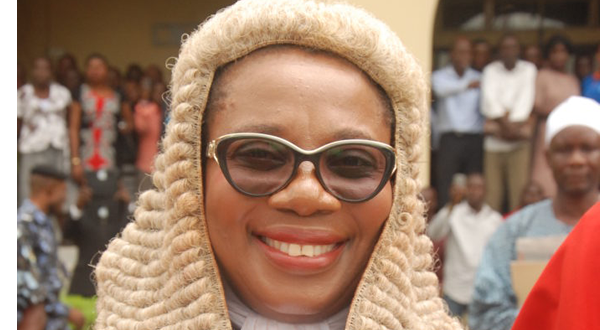 The Lagos State House of Assembly on Thursday cleared the nominee of Governor Akinwunmi Ambode for the position of the Chief Justice of the state, Hon. (Justice) Opeyemi Olufunmilayo Oke.

Justice Oke was appointed as the Acting Chief Judge of the state two months ago after the retirement of the former Chief Justice of the state, Justice Olufunmilayo Atilade.

Ambode had earlier sent a letter for the clearance of the Chief Judge to the House of Assembly as stipulated by the law.

With the appointment, Justice Oke becomes the third consecutive female Chief Justice of the state after Justice Ayotunde Phillips and Justice Olufunmilayo Atilade both retired.

The Chief Justice however, took time to answer the questions put across to her by the lawmakers, just as she threw her weight behind the death penalty to serve as a deterrent to others.

Oke stressed the need to sustain the death penalty, saying that those who kill others should be killed to serve as a deterrent to others.

“Those who kill others should be killed. I challenge the state governors to sign death warrants so that people would be discouraged from killing others. So I am for the death penalty,” she said.

Some of the questions she was asked by the lawmakers bother on prison decongestion, accelerating cases in courts, integrity, establishing more courts, handling rape cases, capital punishment amongst others.

She spoke on the issue of juvenile delinquency and hard drugs amongst undergraduates.

The judge told the lawmakers that foster homes would be created to house juvenile prisoners.

According to her “most students go into drug abuse due to peer group influence, an awareness would be created on this and we would work in conjunction with the executive and the legislature on this.

“I am not happy with delay in justice and it is part of what I want to work on. Lawyers are also culpable on this, and we would have polices on this as a new administration. Our judges are ready for change if others are ready.’

She also stated that she would fast track other cases apart from commercial such as those involving lands, family, crime and others.

The judge said further that there were many cases in Lagos courts due to the population of the state, but that efforts would be made to accelerate all the cases in the courts, adding that she is not happy that some cases last 25 years or more in the courts.

The woman promised to lobby the executive and the legislature so that each local government in the state would have a magistrate court and mediation centres to bring justice to the grassroots.

Oke later promised to ensure better relationship between the judiciary and the legislature, and apologized for past mistakes from the judicial arm of government.

Justice Opeyemi Olufunmilayo Oke, who was born in 1954, studied law at the University of Ife now Obafemi Awolowo University and the Nigerian Law School.

She worked briefly at her father’s chamber, Okesanya and Okesanya & Co.

The judge later went to the United States of America for Masters Degree in Criminal Justice Administration and specialized in Criminology and Juvenile delinquency.

After she got back to Nigeria, she worked briefly at the Federal Housing Authority (FHA), where she used to prepare contracts.

She later started working with the Lagos State Government, and started her career with the State Government as Chief Magistrate, then she became a Deputy Court Registrar before she was appointed as a judge of the high court.

After this, she applied to the embassy of the United States of America and went for a programme that was sponsored by the American Congress in the US.

There, she studied Judicial Administration for electronic recording, and came back to the state to work on the establishment of Citizen Mediation Centre to settle certain civil cases out of court.

Also, she was the Chairman of the committee that reviewed court rules of 1974 in 2004 during the era of Asiwaju Bola Ahmed Tinubu as Governor of the state and Professor Yemi Osinbajo as Commissioner for Justice and Attorney General of the state.

The rules have since been adopted by all the courts in the country.

Oke also worked on the process of fast tracking court cases in the state specifically commercial cases and she was later appointed as Acting Chief Justice of the state by Governor Ambode after the retirement of Hon. (Justice) Olufunmilayo Atilade.

Meanwhile, the Bill for A Law To Provide for The Use of Yoruba Language in the state was passed by the House and the Clerk of the House was ordered to send the Bill to the Governor for assent, while the House adjourned sitting to Monday 23rd October, 2017.