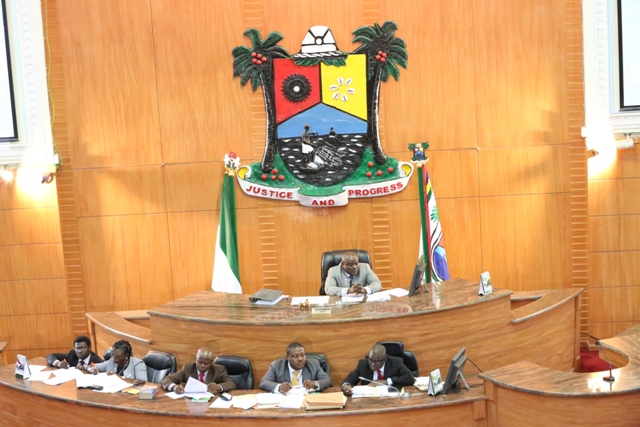 Lagos State House of Assembly has called on the Commissioner for Environment, Dr. Babatunde Adejare to direct the state task-force and other relevant agencies under it to drive away traders from Okokomaiko and Volkwagen area along Mile 2/Badagry Expressway, saying that the traders were causing traffic snarls on the road.

This followed a motion moved by a member of the Assembly representing Ojo Constituency 1, Hon. Victor Akande, which was seconded by Hon. Gbolahan Yishau from Eti-Osa Constituency II to checkmate the unruly activities of traders in those areas.

Speaking on the activities of traders on Lagos/Badagry expressway precisely between Okokomaiko and Volkwagen Bus-stop, the lawmakers took turn to explain that if the situation was not urgently addressed, it would wreak more havoc on Lagos despite its megacity plan.

Akande disclosed that he had initially brought the issue to the floor of the House, adding that only the state government and taskforce could drive traders from the road.

Also, a member representing Ifako/Ijaiye II, Hon. Rasheed Makinde lamented that despite the huge resources spent to have a safer and cleaner Lagos, some people were still destroying it with their attitudes.

According to him, “some of these people are from Benin Republic. The taskforce should be stationed in that area for three months and in that way, the traders would be chased away from the road.

“We should be mindful of the security of Lagos. We need the support of agencies such as LASTMA, taskforce, RRS among others to checkmate the traders”, he said.

Another lawmaker, Hon. Olawale AbdulSobur, representing Mushin II said, “What we saw on our way to Badagry was an eyesore. Even some LASTMA officials are joining them to perpetrate evil. Buses are plying one way.”

Meanwhile, the Speaker of the House, Rt. Hon. Mudashiru Obasa lamented the ordeal witnessed by members on their way to Badagry during a recent official assignment.

Obasa disclosed that the road was blocked for hours which hindered smooth traffic operation.

“This is not what we want in Lagos and it is time for us to act fast. It is important for us to urge the commissioner for environment to as a matter of urgency direct the state task force and other agencies to drive these people out of the road.

“If we can bring sanity to Oshodi, I believe bringing sanity to that area would not be difficult,” he said.
—