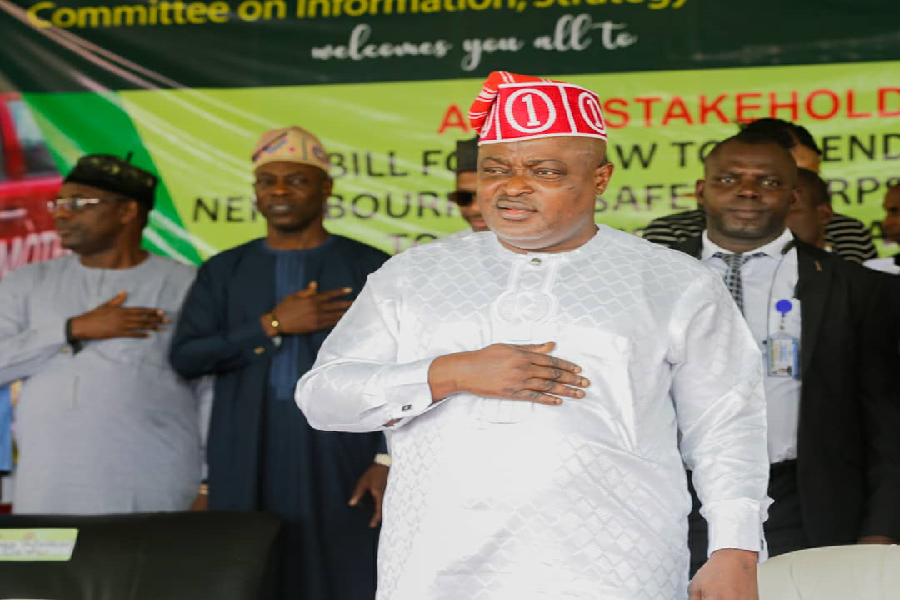 Lagos State House of Assembly on Monday held a day Stakeholders’ Forum on, “A bill for a Law to amend the Lagos State Neighbourhood Safety Corps Agency Law 2019 to establish Lagos Amotekun Corps”.

It would be recalled that the House during the last Plenary Session on Thursday committed the Bill to the House Committee on Information, Strategy & Security chaired by Hon. Tunde Braimoh for a Public Hearing.

The Bill which is titled, “A House of Assembly Bill No. 5, Lagos State Neighbourhood Safety Corps LNSC Amendment Bill 2020 and for Connected Purposes” is meant to energize and strengthen the security of Lagos State based on the challenges in the State and South West.

Hon. Tunde Braimoh representing Kosofe II in his Welcome Address, affirmed that Section 14 1(b) of the Constitution of the Federal Republic of Nigeria (1999) as variously altered; declares the primary purpose of government as the Security and Welfare of the people and the House of Assembly’s usual manifestation of its unwavering mission which is to be a State House of Assembly poised to make laws for the good governance of Lagos State representing the interest of the people while ensuring judicious use of State resources for the maximum benefit of Lagosians in pursuit of excellence.

“While talking of Lagos Neighbourhood Safety Corps Law, it would be most unconscionable and uncharitable not to give credit to the progenitor and chief promoter, Rt. Hon. (Dr.) Mudashiru Ajayi Obasa, the Speaker of Lagos State House of Assembly who industriously led the business of thinking out that Bill which today is popularly enthused reference-point legislature.” He said.

He added that the whole essence of the forum is to stimulate and engender robust contributions that will make the proposed Law popularly acceptable and impactful.
Speaker of the House while appreciating the honor granted by the Leaders and eminent personalities that graced the Forum, noted that the bill Lagos Amotekun Corps has generated a lot of argument both in support and against, however, the constitution is so glaring about the issue of security that the lives and properties of people must be protected by every form of government.

“The Lagos State House of Assembly in its own wisdom in 2016 came up with Lagos Neighbourhood Safety Corps Agency Law to support the Nigerian Police Force and other security organisations to ensure that we do not fail in our responsibilities.”

“We have come to look at the Bill, which will be amended and incorporated into Lagos Neighbourhood Safety Corps Agency Law and this Bill talks about our borders, forests, and farms around us in Lagos State. This bill has its own peculiarities, especially concerning our challenges and in that wisdom we will look at this Bill and make sure that justice is done. The most important thing is; Amotekun has come to stay and we need to give it the full support.” He said.

The Majority Leader of the House, Hon. Sanai Agunbiade representing Ikorodu I during his presentation of the General Overview of the Bill summarized the amendments incorporated into the Law which consists of 6 critical sections.

Hon.  Agunbiade described the Amotekun symbol as an animal which is brave, strong, that inhabits land and water. “The Lagos State Amotekun Corps subject to approval of the Inspector General of Police has the power to bear licensed arms and Amotekun will not infringe on anybody’s fundamental human rights.”

In his contribution, Hon. Babatunde Balogun, All Progressive Congress APC Chairman while commending the State Assembly noted that Amotekun is a concept which will protect the interest of each State.

Aare Onakakanfo, Otunba Gani Adams also lauded the House for the idea of incorporating Amotekun into the LNSC Law.

“Yoruba is one of the organized race in the world, having this Stakeholders’ Forum will have all individuals draw up their memorandum for the House and at the end of the day, Lagos State will have one of the best Laws for Amotekun. The issue of Amotekun will bring the unity we have been praying for in Yoruba Land, even though there have been various antagonisms concerning it. Security does not discriminate in crimes and all interest of the South-West is protected with Amotekun.” He stressed.

Solicitor General, representing Attorney-General of Lagos State, Mrs. Titilayo Shitta-Bey said that the sections amended must be critically looked into and the Ministry of Justice has submitted a letter to the House notifying them of further amendments to the Bill.

Also contributing, Hon. Seye Oladejo drew the attention of the House to the Board Members on the Amotekun bill as it is a step ahead of present image regarding Lagos Neighbourhood Safety Corps.

He added that security checks must be done on the recruitment for the Amotekun outfit as they must have the local knowledge of the terrain, either land and water in order to combat Local, State and National threat.

Some of the Stakeholders’ Mr. Seriki Ibrahim, Mr. Gbenga Alowonle, Mr. Lekan Otukoya, Abdul-Ganiu Olatokunbo, Mr. Babatunde Odunlami, Com. Rasaq Olokooba amongst others who contributed their various opinions during the comments and response section noted that those who protect the communities and environs should be incorporated as recruits, including the Amotekun Court and Justice, as well as the recruiters be given adequate training to combat threats.

It was also observed by Stakeholders’ that nepotism and partisan must be shunned off as well as checks and balances to ensure that the Amotekun Board Members’ do not exercise veto powers and also enjoin that religious bodies representatives’ be included in the Board of Trustees.

The Peoples’ Democratic Party (PDP) Chairman, Mr. Sunday Olaifa affirmed that PDP is in full support of Amotekun as it depicts the Yoruba tradition; as well as the representative of Christian Association of Nigeria.

Representative Lagos Central Mosque, Noheem Olusola Saheed also opined that Amotekun is undisputedly laudable and it is a complimentary effort of the Lagos Assembly.

In response to their comments, contributions and observation, the Chairman House Committee on Information, Strategy and Security, Hon. Tunde Braimoh appreciated the Stakeholders for being virtual, vocal and brave with their contributions.

He thereafter implored Stakeholders to submit their memorandum to the Secretary of the Committee on or before 2nd of March, 2020.