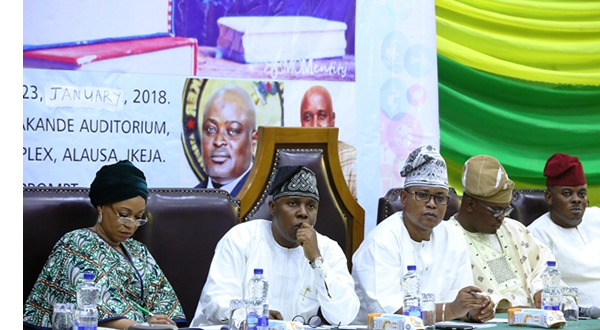 The Lagos State House of Assembly on Tuesday said that its move to reintroduce the Teaching Service Commission (TESCOM) in the state was borne out of the need to further strengthen education sector.

The Speaker of the House, Rt. Hon. Mudashiru Obasa disclosed this at A-Day Stakeholders’ Meeting on a Bill for a Law to Provide for the

Obasa, who was represented by his deputy, Hon. Wasiu Eshinlokun Sanni said: “this all important bill tries to encapsulate all the things

needed to make the transfer of knowledge in our schools seamless.

The speaker, however, said that all the suggestions of stakeholders

would be factored in the final bill that would be passed by the House.

Doing an overview of the bill, Hon. Sanai Agunbiade, the Majority Leader of the House said that the bill seeks to repeal the Lagos State

According to Agunbiade, the bill will strength education institution

protecting members of the commission.

professionally qualified teachers will be teaching in Lagos State.

This is noble and will prevent infiltration in the teaching

Agunbiade said that the bill properly validated the creation of the

six Education Districts in the state.

members who shall be appointed by the Governor.

The bill empowers the commission to exercise control over all the education districts by coordinating the management of districts.

to include: “maintenance of comprehensive and up-to-date personal

records for the teaching service and ensure staff welfare and

“Supervise the activities of the six (6) Education Districts

established within the 20 Local Government Areas and 37 Local Council Development Areas (LCDAs) among others.

Meanwhile, the section 11 of the bill highlighted the powers of the

commission to include: “employ all categories of teaching and

non-teaching staff for placement in all Education Districts, subject

to the approval of the Governor’’.

The stakeholders took turns to commend the bill but expressed some

reservation on composition of the boards, creation of State Registration of Teachers Unit among others.

In his contribution, Mrs Oyefunke Adepoju , the First Vice President

of the All Nigeria Conference of Principals of Secondary Schools

(ANCOPSS) called for representation of the Nigerian Union of Teachers (NUT) and ANCOPSS on the board.

Comrade Segun Raheem, the Lagos State Chairman of NUT, who noted that the bill was important, however said that the five-member board of the commission was inadequate to cater for the large population of the teachers.

Generals/Permanent Secretaries (TG/PS)of the six Education Districts subservient to their counterparts in the commission and Ministry of Education.

On the establishment of the Teachers Registration Unit, the union

leader said that this was unnecessary as the teachers in the state had registered with the Teacher Registration Council of Nigeria (TRCN).

“If we want to put things right, the TGs/PS for the education

districts should be appointed from the serving principals in the state

rather than choosing officers from the ministry,’’ he said.

Mr Gbolahan Enilolobo, the Coordinator, Lagos Chapter of TRCN, who

noted that teaching profession has to be professionalised, added that

the state Teachers Registration Unit was not necessary.

the state had been certified by TRCN and the certificates are

Speaking with newsmen, Hon. Olanrewaju Ogunyemi, the Chairman, House Ad hoc Committee on Education said: “It is the wisdom the state government to harmonise two laws.

“By the time we look at the observations and comments, we will come out with a clean bill that would strengthen the education sector’’.

According to him, the state will now have a commission to look at

promotion, transfer of teachers, discipline and others.

“We want to assure the parents that public schools would be properly operated and they can be sure that their children are in safe hands.