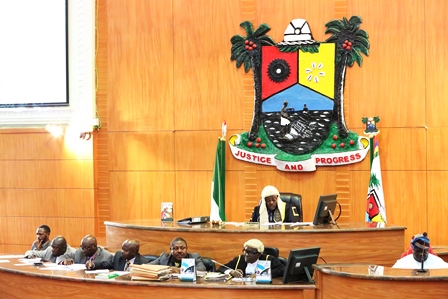 The Lagos State House of Assembly on thursday ordered all its standing committees to earnestly work on the budget estimates for 2017 by inviting Ministries, Departments and Agencies (MDAs) of governments for the defence of the proposals.

With this, the Speaker, Mudashiru Obasa, who presided over the plenary directed the committees to report to the House committee on Budget and Economic Planning within two weeks.

Obasa explained that the trend in the media over the debt profile of Lagos as being the highest among other states in the country did not hold water.

The House resolved to go ahead with the invitation of the MDAs having read the first and second readings simultaneously of the budget proposal as presented by the State Governor, Mr. Akinwunmi Ambode.

Ambode had on Tuesday November 29 presented budget proposal of N813billion to the House of Assembly, assuring the state that the budget would be judiciously implemented to continue the massive infrastructure renewal and the enhancement of Lagos as one of the foremost tourism and investment destinations in Africa.

The Governor, who christened the 2017 budget “The Golden Jubilee Budget”, as it coincides with the State’s 50th Anniversary, said it would focus on physical infrastructure, while social sectors especially health, education, youth and social development would get adequate attention.

Giving the key components of budget, Governor Ambode said recurrent expenditure would gulp N300.535billion while N512.464billion would be dedicated to capital expenditure, representing a Capital/Recurrent ratio of 63 percent to 37 percent.

The lawmakers who took turns to debate the components of the estimates, expressed satisfaction over the proposal, saying the readiness of the state government to spend more on capital expenditure indicated the sensitivity of government to the plight of the people.

Some of the lawmakers also allayed the fears of the public on the possibility of government to be able to generate 70 percent of the Internally Generated Revenue (IGR) as proposed by the Governor.

In his comments, Chairman House committee on Public Account (local), Bisi Yusuff stated that the budget proposal would address the challenges of unemployment.

On his part, Chairman House committee on Waterfront, Gbolahan Yishawu said that “I am gladdened the budget estimate strives to take care of making money available to the people.”

Yishawu, however, cautioned his colleagues to properly scrutinize the roads “that are categorized under Public Private Partnership (PPP),” adding that there are rules to be followed especially in relation to getting approval from the House.

The Chief Whip, Rotimi Abiru expressed reservation over the ability of the state government to generate the 70 percent IGR being proposed by the Governor.

Abiru however pointed out “the MDAs have not given detailed reports of third quarter of 2016.”

The Majority Leader, Sanai Agunbiade urged the various committees of the House to get all the necessary papers from the MDAs in order to assist in carrying out thorough verifications of their proposals.