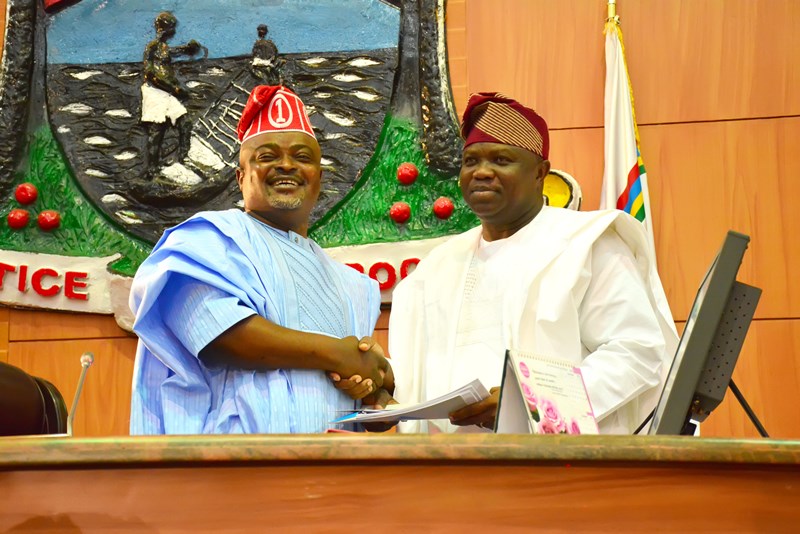 The 2016 Budget proposal of N662,588 Billion presented to the Lagos State House of Assembly by Governor Akinwunmi Ambode of the state on Thursday 17th December, 2015 has been passed into law by the House.

In presenting the budget, the Lagos State Governor, Mr. Akinwunmi Ambode  pledged that his administration will not only implement the budget faithfully, but also ensure that it works in the best interest of Lagosians.

The Governor who christened the 2016 budget “The Peoples Budget” said it was an improvement of 26 percent over the budgets of 2014 and 2015 respectively which stood at N489.6 Billion individually.

“The increase will enable our government to focus on the present challenges of security, traffic gridlock resolution including physical and social infrastructural development which has thrown up new challenges quite different from what we used to experience and have always known”, he said.

He said the 2016 budget which is the first full budget of the present administration will promote massive investment in Security, Transport and Traffic management, Physical and Social Infrastructural development and enhance job creation.

He said the intention of his government is to use the 2016 budget to strategically build new infrastructure, as well as maintain existing ones, adding that wealth and employment creation will also receive adequate attention in the course of the year.

Giving a breakdown of the budget figures, Governor Ambode put the Recurrent Expenditure at N278,909bn while Capital Expenditure stands at N383,678bn, explaining that the Capital to Recurrent ratio is 58:42 as against 51:49 in 2014 and 2015.

Governor Ambode also put the total revenue estimate for 2016 fiscal year at N542.873Billion saying the balance of N119.714billion will be funded through deficit financing constituting 0.41 percent of the state GDP based on 2016 budget alone and a cumulative debt to GDP ratio of about 3 percent.

It will be recalled that the Speaker of the House, Rt. Hon. Mudashiru Obasa subsequently committed the budget  into the House Committee on Budget and Economic Planning, which is chaired by Hon. Rotimi Olowo with a directive that the report should be submitted to the House on Thursday 31st December.

Presenting the report of the Budget and Economic Planning Committee to the House on Thursday 31st, December, 2015, Hon. Rotimi Olowo thanked the Speaker of the House, members of the committee, other lawmakers as well support staff of the House, who he said worked tirelessly to ensure that the process of scrutinising the budget was accelerated.

Also speaking, Speaker Obasa thanked all the members of the Budget and Economic Planning Committee for their efforts, while also thanking other lawmakers and the staff of the Assembly.

The House however went on recess and adjourned sitting to 4th February, 2016.