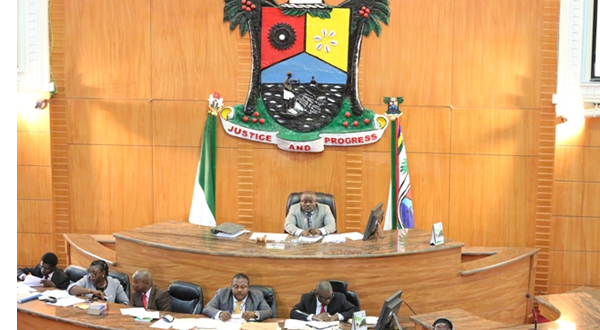 The Lagos State House of Assembly ad-hoc committee screening Governor Babajide Sanwo-Olu’s cabinet nominees resumed the exercise on Thursday with the final batch of 13 nominees it received over the weekend.

The 16-man committee chaired by the Chief Whip, Hon. Rotimi Abiru, screened seven out of the 13 nominees sent to the House while the remaining six will take their turn today (Friday).

Among those screened were the Lagos State All Progressives Congress (APC) Publicity Secretary, Mr. Joe Igbokwe.

Igbokwe was subjected to series of questions by the committee members.

He confessed that as a loyal party member he had expected that he would just be told to take a bow and go by the committee members but that to his surprise he was drilled even more than the nominees who appeared before him.

Answering questions from journalists after his screening, Igbokwe said: “The screening was quite excruciating, I was asked about 15 questions which I answered.

“I thought they would just ask me to take a bow and go having served the party for a number of years, because all of them are party members but I met a different thing; I thought it was just to go and take a bow and go but ended up spending more time”.

Igbokwe said it is difficult for him to disengage from the image making job which he has been doing for the party over the years.

“I have been doing the job for too long, it is almost a part of me, but you know we must move on, I am happy about my nomination, it is a call to service and I know I will add value to where ever I find myself, that is my goal, my motive,” he said.

“My idea about life is that you must add value where ever you find yourself; I will have to continue to work and to continue to render service to the people”.

He also explained that why his kinsmen had issues with APC in Lagos in the last election was because the Peoples Democratic Party (PDP) fielded Peter Obi, an Igbo man as its vice presidential candidate, saying the people felt naturally drawn to their kinsman.

He ascribed low Igbo votes in the state for President Muhammad Buhari at the 2019 general elections to ethnicity, saying that the Igbos had sentiment for the PDP because its running mate was an Igbo man.

The Lagos APC Publicity Secretary added that before the general elections, the Igbos in Lagos had made it known publicly that they would not vote for the APC at the presidential election but that they would for Sanwo-Olu at the governorship election.

“The Igbos in Lagos State were moved by Peter Obi to have voted enmasse for the PDP at the presidential election in the last general elections.

“They made it known publicly that they won’t vote for President Buhari because of tribalism. They assured Lagos APC of their votes and which they fulfilled by voting for APC in the governorship election.

” Ethnicity and tribalism will not take us anywhere in this country. If I should have my way and become a President of this country, I will ensure that State of Origin is totally removed from our curriculum vitae and we will consider competence rather than where one comes from,” Igbokwe said.

As at the time of filling this report five out of the seven nominees slated for screening had been attended to and they are: Mrs. Yetunde Arobieke, Mr. Joe Ignokwe, Mr. Oluwatoyin Fayinka, Mr. Oladele Ajay, Arc. Kabir Ahmed.