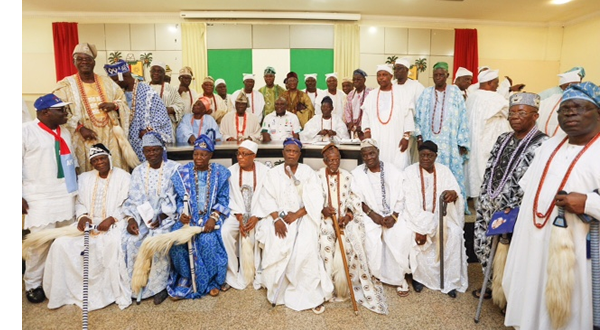 Members of the Lagos State House of Assembly have passed a motion calling on the state Governor, Mr Akinwunmi Ambode to direct the state Commissioner for Local Government and Community Affairs, Hon. Muslim Folami to review upward salares of traditional rulers in the state.
The motion was moved by Hon Lanre Ogunyemi, representing Ojo State Constituency 2 and Chairman of the House Committee on Education. Supporting him to move the motion are: Honourables Sanai Agunbiade, Olumuyiwa Jimoh, Adebayo Osinowo, Princess (Mrs) Adefunmilayo Tejuoso, Dayp Saka Fafunmi, Sola Giwa, Tunde Braimoh and Hakeem Sokunle.
Moving the motion on the floor of the House, Hon Ogunyemi stated that most palace ceremonies and programmes are conducted in English Language. The lawmaker also observed that if traditional rulers are encouraged to perform their statutory duties, “wealth of experience will fast track desired change in their various communities and add values to governance”.
Hon Ogunyemi lamented the indiscriminate creation of new traditional stools noting that this will downgrade esteemed positions of traditional rulers.
Members like Honourables Adebayo Osinowo, Tunde Braimoh, Wasiu Eshinlokun-Sanni, Yinka Ogundimu, Bisi Yusuf, Rotimi Olowo, Nurudeen Saka-Solaja, David Setonji, Mrs Omotayo Oduntan, Segun Olulade, Sanai Agunbiade, Adedamola Richard Kasumu and Ibrahim Layode all spoke in favour of the motion.
They all agreed that the motion was a good one and it was a unanimous agreement that it will go a long way in enhancing the welfare I the traditional rulers as well as serve as encouragement for them in their duty.
The Speaker of the House, Rt. Hon. Mudashiru Obasa also agreed with the mover of the motion and those who contributed to the debate.
The motion was unanimously passed by members after it was moved by Hon Ogunyemi and seconded by Hon Olulade.
Apart from increasing salaries of traditional rulers, the motion also urged traditional rulers to make Yoruba Language medium of communication in their palace and other public functions.
It also called on the state government to look into the alarming rate at which new stools of Obas are being created with a view to ensuring that the process of upgrading Baales to the status of Obas are strictly adhered to.