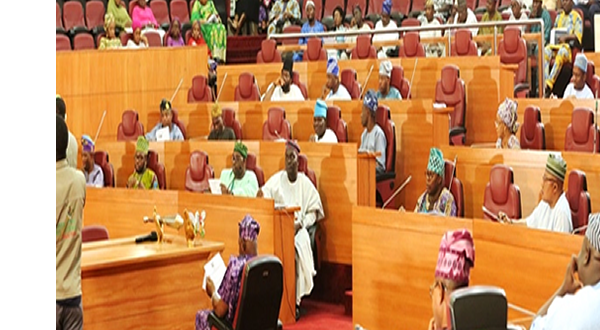 The Lagos State House of Assembly is set to domesticate a law that would regulate and take care of persons with mental disorder.
The Bill for a law to provide for Mental Service Bill, 2018 scaled through second reading during plenary on Monday.
Leading the debate, the Chairman House Committee on Health Services, Hon. Segun Olulade stated that the objective of the law is to protect the rights of persons suffering from mental disorder, adding “when passed into law, it would guarantee the health of persons with mental disorder as we have at the federal level.”
Hon. Olulade likewise hinted that the Bill also sought to repeal the existing lunatic law in the State, saying “it will have a better health service and provide opportunity to collaborate with other health service providers.”
He added that the Bill would protect the rights of persons, who were mentally derailed and also guard against discrimination.
The Chairman disclosed that the Bill, when eventually passed into law, would create and maintain mental health databank.
In his comments, the Chairman House Committee on Information and Strategy, Hon. Tunde Buraimoh explained that the law would disabuse the minds of those who believe “it is only those who are on the streets that are mentally ill.”
He also added that the law would take care of persons in the traditional mental homes who usually beat up persons with mental disorder, saying it would also make provision for research.
Hon. Adefunmilayo Tejuoso stated that from the title of the proposed law, it showed an indication that the word ‘lunatic’ was removed, which according to her “it is a way of protecting the dignity of persons with mental disorder.”
While giving his support, Hon. Abiodun Tobun suggested that the treatment of persons with mental challenges should be free.
He argued that since no family members prayed for such a sudden occurrence, it would be appropriate to shed the responsibility for them.
Hon. Gbolahan Yishawu stated that there were provisions for offences as regards neglect, sexual relationship and other offences with persons with mental challenges, saying thật there should be fine for concealment.
He explained that some family members have a way of shielding persons suffering from this ailment because of societal stigma.
Meanwhile the House screened the State Governor, Mr. Akinwunmi Ambode’s nominees for the Lagos State House of Assembly Service Commission (LAHASCOM).
Those screened included four former members of the Commission who were Mr. Olawale Mogaji, Mr. Balogun Afolabi, Mrs. Ajoke Risikat Adegêye and Mr. Bode Tawak. They were all renominated by the Governor.
The only new nominee screened was a three term former Secretary of Local Government in Agege, Mr. Afolabi Ayantayo.