Lagos Assembly To Partner United Kingdom Over Fight Against Terrorism 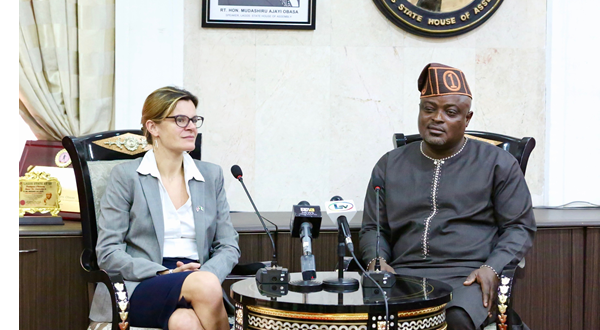 Lagos Assembly To Partner United Kingdom Over Fight Against Terrorism

The Speaker of the Lagos State House of Assembly, Mudashiru Obasa has expressed the readiness of the State government to partner with United Kingdom over the fight against terrorism.

Obasa made the promise while playing host to the United Kingdom Deputy High Commissioner, Laure Beaufils in his office in Alausa, Ikeja.

“Your coming here today is historic being the first female Deputy High Commissioner and coming at a time we are celebrating Lagos at 50.

“I commiserate with the UK government over the incidents in Manchester and the London Bridge attack. Please, accept our condolences. We stand by the government and people of UK. People must be free to practise their faith,” Obasa said.

The Speaker said that the relationship between Nigeria and United Kingdom has been cordial for years, assuring her that the longstanding collaboration would be sustained.

He added that the Deputy High Commissioner should use her position to strengthen the relationship “in the area of attracting investors to Nigeria especially Lagos State.”

Earlier in her address, the envoy said her visit to the Lagos Assembly was coming at a time UK was conducting its general elections, saying that she is “deeply impressed with the level of legislative activities in the state.”

Beaufils disclosed that since her arrival in Lagos in the last three months she had been able to acquaint herself with a lot of developments such as oversight function and other legislative duties.

“In the last three months, I have learnt about democratic principles. I am here to pay my respect and to further strengthen our relationship, I am here to learn about the challenges; we are trying to deepen the relationship with Nigera and Lagos State in particular,” she said.