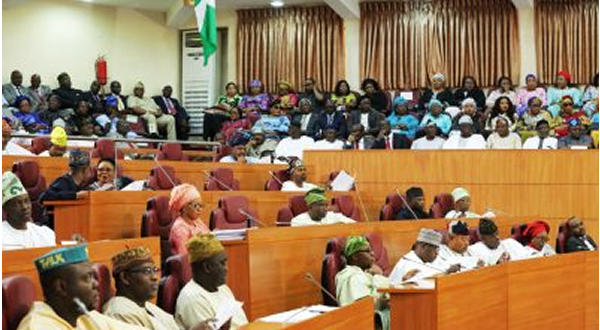 The House also cautioned the outgoing Governor of Ondo State, Olusegun Mimiko to ensure smooth legislative activities, saying that the existence of a Governor lies with having a parliament in place.

The resolution followed a motion moved by a member of the House, Hon. Bisi Yusuff during Matters of Urgent Public Importance.

Yusuff said, “Ondo Assembly has been under lock and key; this is not right; it is condemnable. It is never known in this country where the office of executive or judiciary is locked.

“It is not acceptable; there should be a lasting solution to what is happening to the very important aspect of legislative arm,” Yusuff said.

While supporting Yusuff’s motion, the Speaker, Rt. Hon. Mudashiru Obasa who presided over the plenary explained that, “whatever happens to either the eye or nose, the other suffers. We are one! It has become common practice in the country where the parliament is made to suffer.

“If the police insists on shutting down the House, let them also shut down the executive so that we know there is no civil rule in Ondo State,” Obasa said.

Moshood Oshun said, “what holds democracy is the legislative arm, the other two arms of government do exist during military. I have never seen where the office of a governor is locked.”

The Chief Whip, Hon. Rotimi Abiru observed that ” this is happening when the state should be transiting. I want to appeal to the Nigeria police that the act is a bad signal to democracy.”

Also speaking, Hon. Segun Olulade stated that the development in Ondo State could be seen as planning a coup against the people of the State.

On his part, Olanrewaju Ogunyemi believes, “what is nauseating aspect of the issue is that it was ordered by the Inspector General of police, adding that he should know his constitutional responsibility.

Hon. Jude Idimogu however urged his colleagues not to allow the executive arm to disrupt the activities of the Houses of Assembly, saying that members should learn from Ondo Assembly.

The Deputy Majority Leader, Hon. Muyiwa Jimoh said that instead of calling for the reopening of the State Assembly, the House should write ‘an independent opinion’ condemning the act.

Jimoh argued that Lagos Assembly has no locust standing to reverse the decision of the federal government.