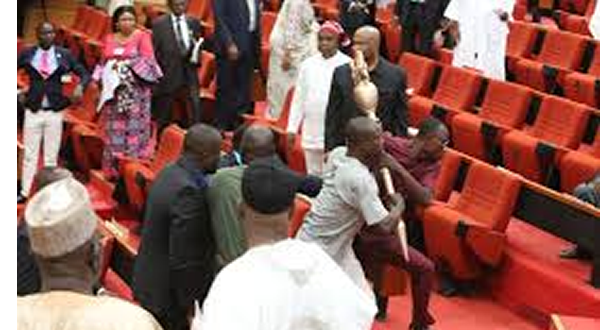 Consequent upon the invasion of the Senate by suspected hoodlums last week, lawmakers in the Lagos State House of Assembly have described the act as a rape of democracy.

The suspected thugs invaded the Senate chamber, while plenary was on and made away with the mace.

Although the mace has since been returned to the senate by the police after it was found under a bridge in Abuja, the Lagos lawmakers condemned the act, saying that it was a national embarrassment.

Moving the motion Under Matters of Urgent Public Importance, Hon. Moshood Oshun from Lagos Mainland 2 called on his colleagues to identify with the Senate, and that the security apparatus of the National Assembly should be properly beefed up to forestall a reoccurrence.

“Whether we like it or not, the legislative arm of the government is the most important. The invasion is a rape on democracy. What happened was an attack on democracy all over the world,” Oshun said.

While commending the Senate for its determination to continue the legislative business despite the invasion, the lawmaker described the incident as barbaric.

In his ruling, the Speaker of the House, Rt. Hon. Mudashiru Obasa joined his colleagues to condemn the act.

According to Obasa, “I strongly support your position on the ugly incident. It was a rape on democracy; it was an abuse of an arm of government. The security apparatus should be condemned, if they had been up and doing, they would have prevented it.”

The Speaker used the opportunity to advise heads of government agencies to always respect the legislature whenever they were invited, saying that it would amount to disrespect if such invitations were not honoured.

The Speaker then directed the Clerk of the House, Mr Azeez Sanni to write the Senate as a sign of solidarity.

The lawmakers had taken turns to express their displeasure over the matter.

Hon. Bisi Yusuff wondered what would happened if the Speaker of the Lagos State House of Assembly was to be kidnapped, urging the security operatives to be up to their duty.

The Deputy Majority Leader, Hon. Olumuyiwa Jimoh noted that “the internal security of the House should be independent of any other arm of government. The hallowed chamber is sacred. It should be well protected.”

The Majority Leader, Hon. Sanai Agunbiade said that “the issue goes beyond the mace. It simply means everybody in the Senate was not safe.

Agunbiade added that the woman at the office of the Sergeant-at-arms, who got injured in the process of trying to protect the mace should be compensated.