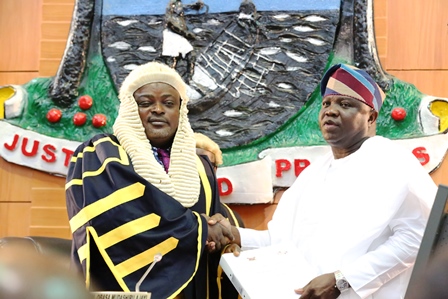 Governor Akinwunmi Ambode has presented a 2017 budget proposal of N812. 99 billion to the Lagos State House of Assembly for approval.

The Governor said that the recurrent expenditure stood at N300 billion while the capital expenditures stood at N512.46 billion.

“The People’s Budget of 2016 has positively impacted the lives of Lagosians. I am confident that Year 2017 budget will consolidate on our modest achievements and propel our state to enviable heights.

“Year 2017 budget will be at an auspicious time when our state will be celebrating its Golden Jubilee Anniversary. “This will continue the massive renewal of our infrastructures and enhancement of Lagos as one of the foremost tourism and investments destination in Africa.

Ambode said that the recurrent expenditure performed at N180 billion which is 82 per cent of the budget. According to him, the state has maintained the conservative approach in estimating federal allocation due to fallen oil prices.

The Governor, however, said that the state expected an increase in federal allocation through the 13 per cent derivation from oil and gas in 2017 budget, adding that the income would be paid from December.

He said that the state would enhance revenue growth on several initiatives including automation and efficient revenue administration.

Ambode added that the state would ensure more collaborations with local and international investors, especially in the areas of road network expansions, transports, housing and environments.

The Governor added that the state government would continue to render its performance to the residents of the state through the Town Hall Meetings.

“It is my strong belief that by the end of this Year, there would have been more improvements in the performance indices due to our strong investments in infrastructures,” he said.

He commended the House for its strides in growing and developing the economy of the state.

The Speaker of the House, Rt. Hon. Mudashiru Obasa, while responding to the budget presentation, commended the Governor for his determination to develop the state despite dwindling revenue.

The Speaker, in his appraisal of the governor on road infrastructure and transportation themed, “Light Up Lagos Project” said the House would continue to support the executives to bring more development to Lagosians.

“Almost all projections in the 2016 budgets have been carried out despite the economic situation. I commend the Governor for a number of life-changing projects introduced,” the speaker said.

Mr. Speaker, while reiterating on the House  commitment on enacting laws that would improve socio-economic development of the state, added that the Assembly had passed lots of laws to better the life of residents.

He said that the House would ensure that the 2017 delivers on inclusive growth and prioritise the welfare of the residents. He called on heads of Ministry, Departments and Agencies to cooperate with the House while on oversight functions.