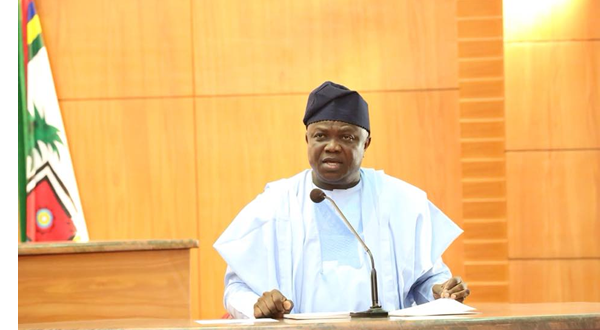 Governor Akinwunmi Ambode has just made an official presentation of the Y2018 budget estimate of 1.046 trillion naira,signalling a new fiscal policy with which the government will pilot the affairs of Lagos State next year.

The total approximate budget size of 1.05 trillion, with 699bn as capital expenditure, while 347bn was estimated as recurrent expenditure bringing the financial estimate projections to 28.6 percentage higher than that of 2017.

Considering what appears to be a breakaway from the norm and history of Lagos State budget presentation, the Governor made a late showing as he ranks about the tenth on list of states that have presented their budget estimates.

The development was tied to the lately resolved quagmire that nearly rocked the boat of the executive, over Council cabinet composition, to which Governor’s alleged interest was tampered with by political bigwigs in 16 local government areas.

But for the National Leader of the All Progressives Congress, Asiwaju Bola Ahmed Tinubu’s intervention last Tuesday, the presentation would have dragged longer, an unprecedented happening.

The Governor stated that Lagos State contributes not less than 30 per cent to the total Gross Domestic Product of Nigeria within the space of three years, 2015-2017. He also boasted of not securing any new loans to finance governance.

Rt. Hon. Mudashiru Obasa Lagos State House speaker in his response noted that, “this budget proposal marks another basic point of reference in the progressing radical transformations and change that we have been witnessing in Lagos State since the inception of this administration.

He also commended the Governor’s achievement so far, citing infrastructural development across the state as pointers to the success story recorded, which is clearly tied to the synergy enjoyed from the state legislature.

Obasa noted that, “with the feat achieved by Governor Ambode merely two years in office, there is no doubting the responsiveness and readiness of this noble House to continue to support the state through passage of people-oriented and development-focused legislations. We are poised to cooperate with the Executive to develop an economy that is sustainable, smart and knowledge-based and whose commitment to law and order is unequivocal.

“House will not rest on its oars in scrutinizing this Budget to deliver on its promises in meeting the aspirations of the people. As usual, we are duty bound to painstakingly look at the nitty-gritty of the budget for the purpose of transforming same for the benefits of all Lagosians.

The speaker however stated the resolve of the house to aid the smooth flow of governance, “I assure you that this House, through effective oversight, will ensure that the Year 2018 budget deliver on its promises to stimulate the economy of the state by focusing on infrastructure development, delivering inclusive growth and prioritizing the welfare of Lagosians towards making the budget spell out its theme to the letter.

“May I employ this opportunity then to call on the Executive to see all the three arms of government as one as it is obvious that working as a team will ensure prompt service delivery. Working together, as we can see in the last two years, brings smooth effective administration. This is rightly put by Prof Ola Rotimi in his play Ovonramwen Nogbaisi and I quote: “the eyes and the nose are one; when one is hurt, the other shed tears.”