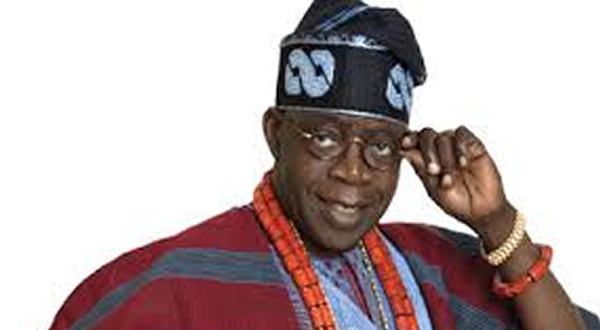 Some lawmakers in the Lagos State House of Assembly have described the National Leader of the All Progressives Congress (APC), Asiwaju Bola Ahmed Tinubu as a true leader and an enigma as he clocks 65 years of age on Wednesday, March 29.

According to the lawmaker who represents Eti/Osa Constituency 2 in the Assembly, Hon. Gbolahan Yishawu, Asiwaju Tinubu is a father, a visionary leader and a mentor.

Yishawu added that it is a thing of joy that Tinubu has turned 65, saying that through him, God has blessed Nigeria and that he is a leading light of Nigerian modern politics.

“He is the pillar of Nigerian modern democracy. He is a tenacious man, his upbeat spirit has helped him to carve a niche for himself in the society. His policy is to liberate the people from oppression.

“Today, Asiwaju Bola Ahmed Tinubu has become a household name because of his passion for the grassroots. He is a man with dignity and vision. He is a leader, he is a divine leader, and a spiritualist.

“He is a kingmaker, a courageous, and fearless leader, a patriot and a motivator, a builder of men and women, a strategic thinker, a trailblazer. I don’t need to dwell much on what he has done because people are aware of these. He is a humanist, those of us that are close to him know that he never wants to see anybody suffer or leave anybody behind,” he said.

The lawmaker, who is the Chairman of the House Committee on Waterfront Infrastructure maintained that Tinubu is a crusader of change, which he said was what brought President Muhammadu Buhari into office.

He said: “He is a great apostle of power. He once said that power is not served a la carte. But he uses power to benefit mankind, Nigerians and the people of Lagos. He doesn’t use power for self aggrandizement, he doesn’t acquire power for the sake of power, he acquires power for the progress of our society.

In his comment, Hon. Abdulsobur Olayiwola Olawale from Mushin Constituency 2 described Asiwaju Bola Tinubu as an icon, a political juggernaut, and that his political power is not limited to Nigeria.

“He is a democrat, he has gone through a lot politically, but he is not weary. He has always been overcoming all the bottlenecks before him. He is an enigma. Asiwaju that I know, who I served as Special Assistant, is very courageous,” he added.

Olawale disagreed with those, who accuse Tinubu of imposition of candidates during election, and made reference to the primary election of the APC in the state that produced Governor Akinwunmi Ambode, who he said emerged as the winner through a democratic process.

Also speaking, the Chairman of the House Committee on Information, Strategy and Publicity, Hon. Tunde Braimoh stated that Asiwaju Bola Ahmed Tinubu is a democrat, and that he changed the political and economic landscape of Lagos.

“He has been a colossus; he has made an indelible mark in Lagos. When the history of Lagos would be written, it would not be complete without a mention of this charismatic enigma.

“When Asiwaju Tinubu became the Governor of Lagos State in 1999, the state was at par with other states in the country. It was just there, but Asiwaju Tinubu raised Lagos to another pedestal. He made it to be distinct. It now became a state, whose Internally Generated Revenue (IGR) is now said to be equal to that of about 30 States in Nigeria.

“As at the time Asiwaju Tinubu became the Governor of Lagos State, the IGR of the state was just about N600 million, it became N7 billion monthly before he left in 2007. This is the progression, it became through a pragmatic, a well tailored and well implemented policies of Asiwaju Bola Ahmed Tinubu,” he said.

Braimoh, representing Kosofe Constituency 2 in the House, stressed that he has had encounters with Tinubu and that he has been very close to him, and declared that he is a good listener, and somebody God has endowed with so many things.

According to him, Tinubu is very witty and gifted with spontaneous response to issues, adding that he is someone he adores a lot, who he said God created specially.

“He has empathy, he believes in welfarism, live and let live. To his wife, he is one of the best husbands, you see a passionate leader in him. He knows what you are going through once he sees you. You don’t need to talk once you get to him.

“When I go to see him, I don’t talk before he addresses my issues unless someone sends me to him. He is gifted with this intuition about human beings. He can read you like a book and he is a good listener. Atimes I lay some claim to brilliance, but I bow when I see him,” he said.

The lawmaker also condemned those who accuse Tinubu of imposing candidates during elections as he said that “such people that have benefited immensely from the so-called imposition turn around to accuse him.”

He said that Tinubu knows what is good for everybody and that he could read people easily.

“He can move you from one position to another, but some people believe that they are the best for everything. People just want to be anything just like that, he would tell you to wait for your time. It is not undemocratic to select. Those who insisted that they would contest primaries against Governor Akinwunmi Ambode did and they know where they are today.

“He begged them to agree with him and take something else, but they refused, some of them are still in debt till today. I waited for 13 years before I got here in 2015. Look at him, he forfeited the office of the Vice President to Professor Yemi Osibajo to avoid Muslim Muslim ticket. He did not mind to do that for the sake of the country,” he stated.

On the cabals in presidency that are reportedly gangging up against Tinubu, he said that Governor El Rufai of Kaduna State spoke against them recently and that they are the ones causing problem for the country.

He described them as selfish people, while advising them to desist from their actions.

“The president should not reject the people God has given him, people that are just coming to him now, they are beret of progressive political ideas. If Asiwaju were to be other mortals, he would have over-hit the polity, which would have caused crisis.

“I want to advice the cabals that are taking advantage of their closeness to the president to advice him wrongly to desist from doing so. Asiwaju has proven himself, God has given him many gifts, he rarely speak.

“They should stop circulating spurious and unsubstantiable rumours that anybody wants to push the president away, when they did not push him away to push him up. The wife of the President, Aisha Buhari once spoken about this cabal around the President,” he stated.
—