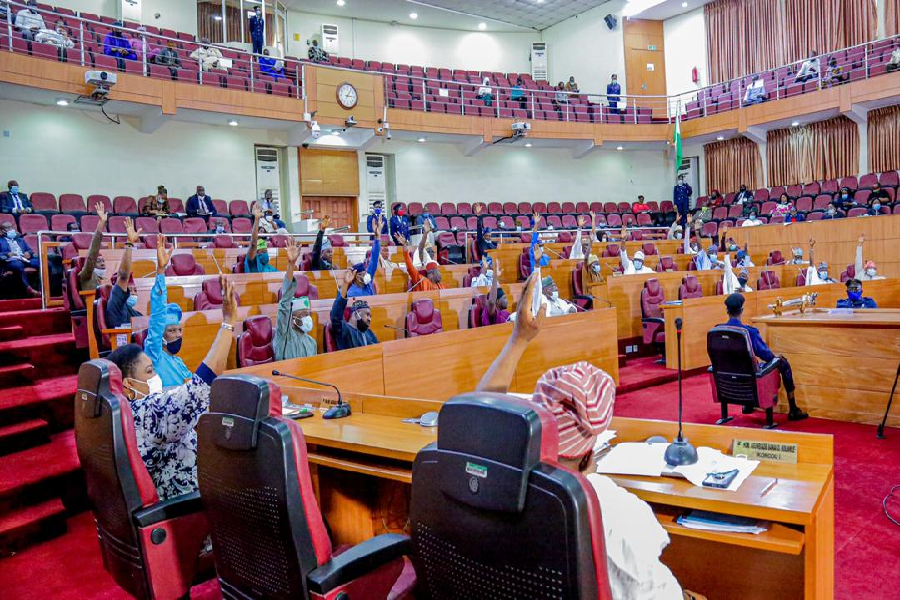 Thirty-five members of the Lagos State House of Assembly on Monday denied a reported plot to impeach their Speaker, Rt. Hon. Mudashiru Obasa. They also passed a vote of confidence on the Speaker.

The lawmakers, who praised the Speaker’s style of leadership, named a member, Hon. Olumuyiwa Jimoh, as the brain behind the false information and sometimes, outright fake stories about the House and its leadership. 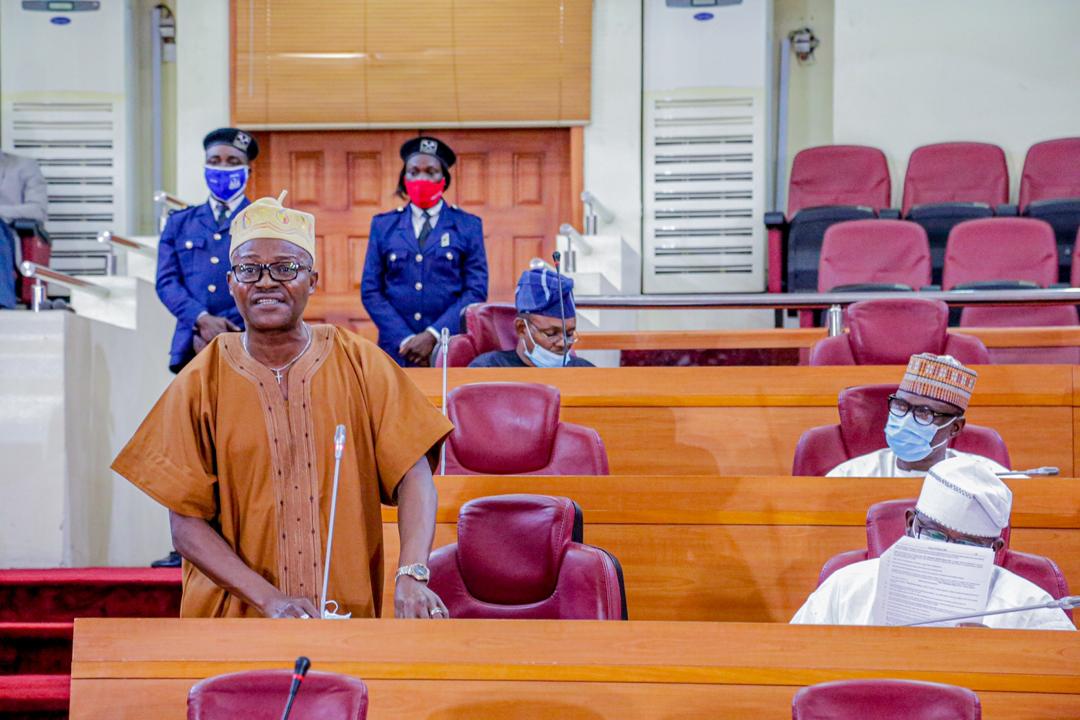 The lawmakers passed the vote of confidence after their colleague representing Somolu Constituency 1, Hon. Rotimi Olowo, raised a motion eulogising the Speaker over the way he runs the affairs of the House.

Olowo thanked the Speaker for addressing the EndSARS protesters at the late hours of Thursday despite his tight schedule, saying it was rear for a leader to do such at that period of time.

“It shows that you are not just a leader but a brother whom blood runs in his vain. And we all know that the youths is the strength of this nation. There are youths who are doing negative things but we have many who are very hardworking.

“They have won many accolades and awards in and outside Nigeria. For you to have taken time to address the protesters, it shows you are more than a leader but a father and a builder.

“In addition, on Friday, you called an emergency plenary to address the issue of the EndSARS protesters; it shows you are a father and a leader. Aside that, you have done things that make me to appreciate you. The preservation of Yoruba language and culture by introducing the speaking of Yoruba language during plenary session on Thursdays.

“Before I will move vote of confidence in you, I want to say this, that you should allow members to raise their voice and as well their hands and allow them to speak because the mischievous people have started again with intention to destroy your person.

“On Saturday, I read on the social media that 26 members of the Lagos state House of Assembly have begun to sign for your impeachment. I don’t know the 26 the report was talking about because I know that you have the majority in this House. And I also know that we are more than 26 who are your followers in this House because you are a great man.

“We should know the 26 members that have signed for your impeachment today. So, I want to urge you, Mr Speaker to allow the members to talk and eulogise you because you are doing well”, said Olowo. 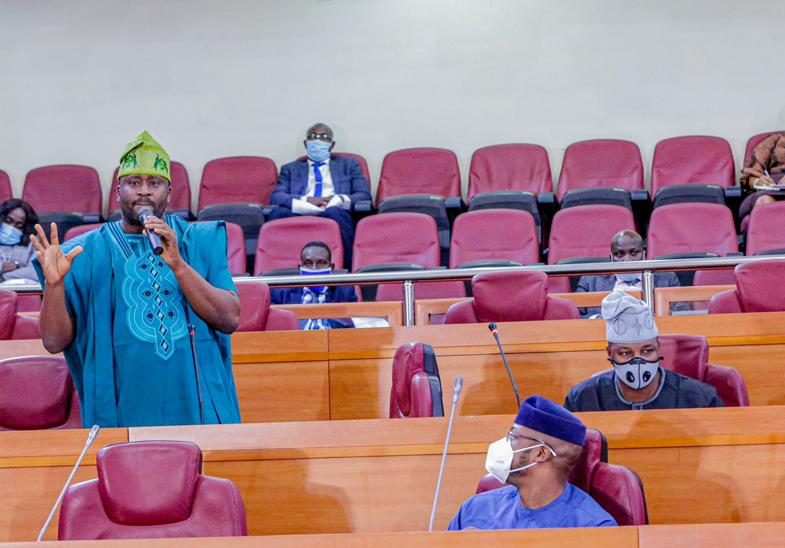 “In his comments, the lawmaker representing Surulere 1, Hon Desmond Elliot, said the issue of lawmakers signing impeachment notice against the speaker was becoming too much, saying that the leadership should invoke the suspension of erring members. 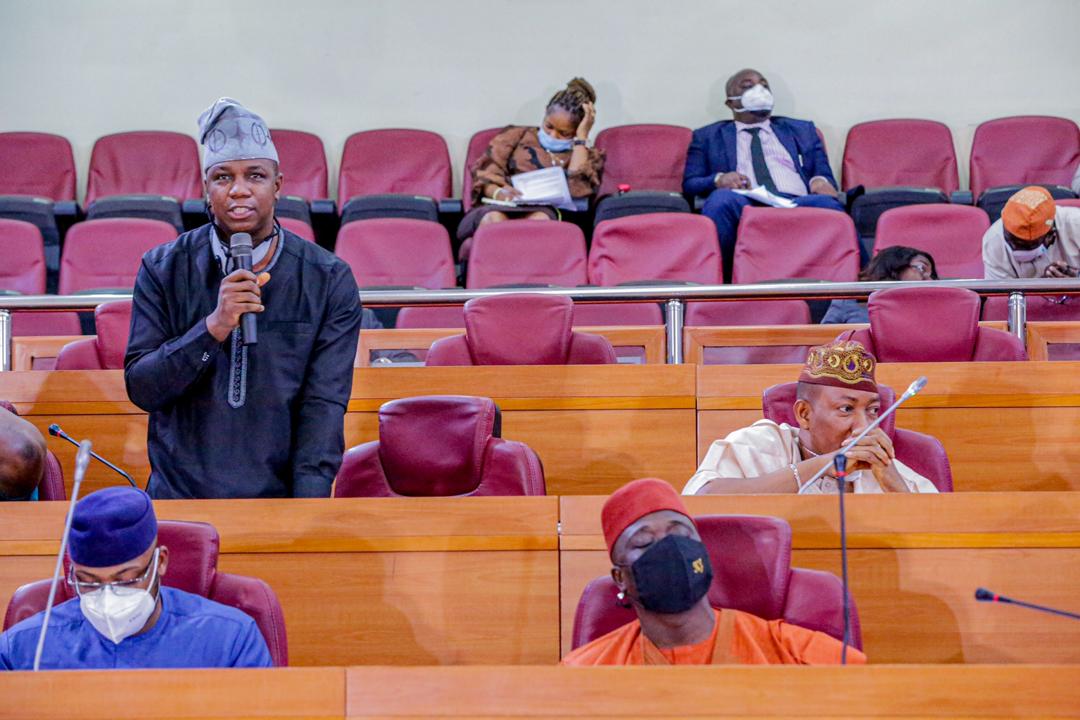 Also, Hon. Fatai Oluwa ( Ajeromi Ifelodun 2) clarified that he was part of the lawmakers who travelled to Turkey as against the earlier false story that the Speaker went alone.

“I was part of the lawmakers who travelled to Instabul in Turkey but to may surprise in the report I read online, Hon. Wahab Jimoh’s name was not mentioned as part of beneficiaries. This shows that he was the one who was divulging information about this House to the media,” he said. 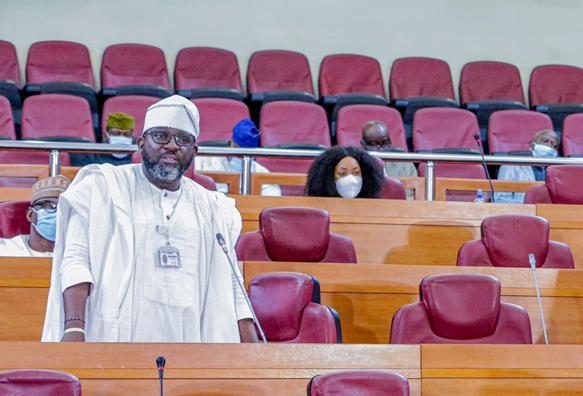 The lawmaker representing Ifako/Ijaiye 1, Hon. Temitope Adewale, assured the Speaker of his loyalty, saying that before he was elected, he had known the House to be a peaceful Assembly.

Adewale also accused Hon. Wahab Jimoh of divulging unauthorised information of the House to the media, saying that he listened recently to a voice note where the alleged lawmaker told some people to search for Houses owned by the Speaker abroad and in Nigeria. 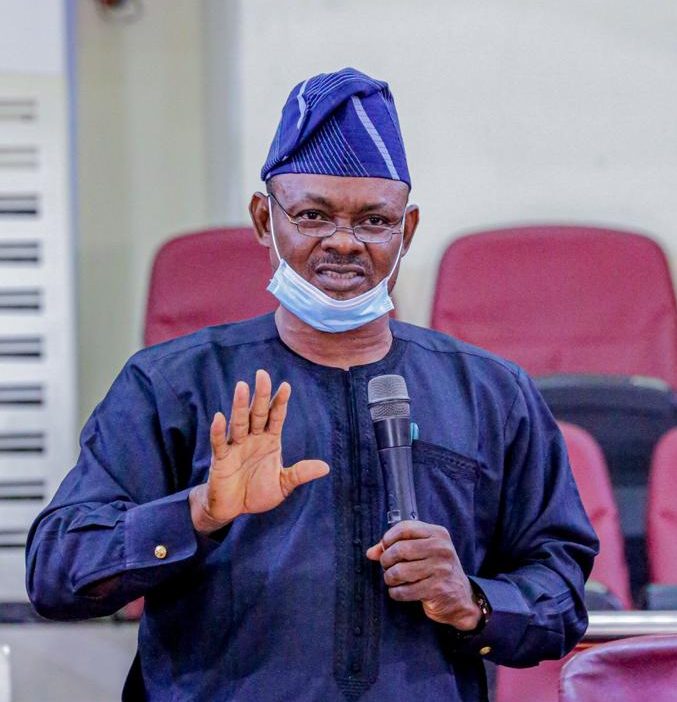 Also, Hon. Olusola Sokunle ( Oshodi-Isolo 1) said his loyalty to the Speaker remains unshakable, adding that those fingered in the act of divulging information of the House to the media should be suspended.

“My loyalty to Speaker Obasa is unshakable. I don’t know why some people would be after pulling Mr Speaker down at all cost. We want the Majority Leader to speak out and make it clear where he belongs if he is for the majority or the minority.

“We have information at our disposal that Hon. Wahab Jimoh is searching around for Obasa’s properties in United States. If any information comes out to the media, I suggest that Hon. Wahab Jimoh should be suspended indefinitely. We should also investigate my dear brother, Hon. Moshood Oshun, if he is part of it. When we have peace we will call them back”, said Sokunle.

Hon. Lukmon Olumoh ( Ajeromi/Ifelodun 1) said: “I don’t know why some members will want to bring the Speaker down at all cost despite his wonderful contributions to the growth and development of State parliament in Nigeria and Lagos in particular. I want to assure Mr Speaker that I remain loyal to him and will stand with him till the end”. 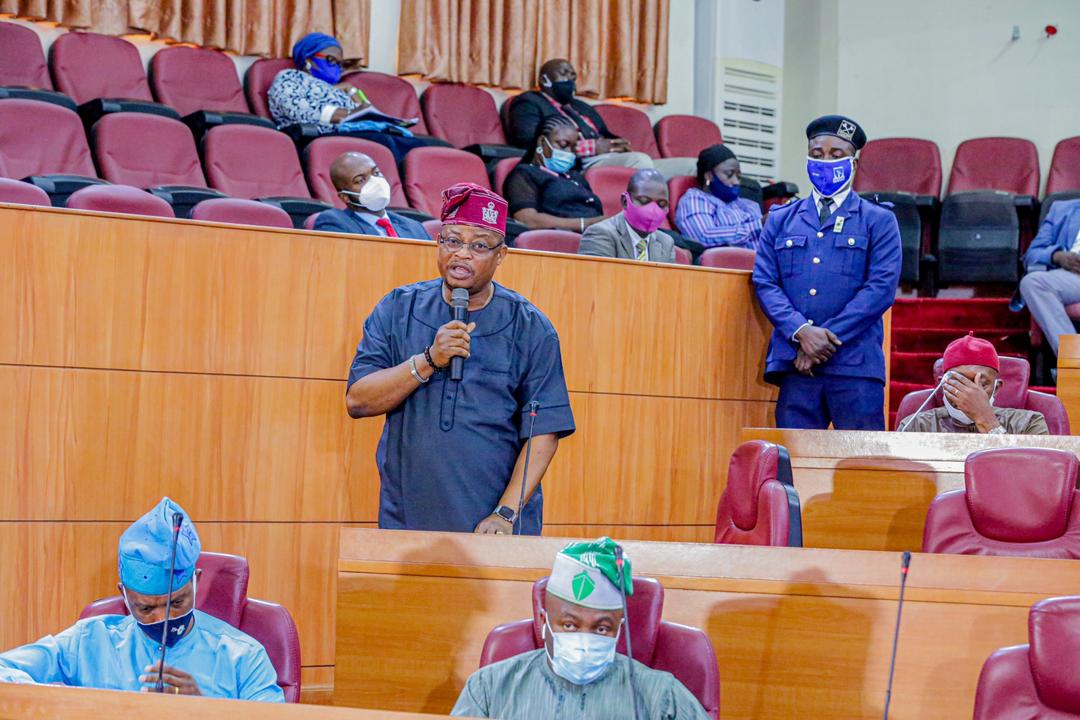 Hon. Victor Akande ( Ojo 2), on his part, described Obasa as a listening leader who accommodates members’ views on issues, saying that the Speaker was instrumental to his re-election.

“I will want the Majority Leader to speak out on where he belongs on this House. We are majority in this House and he is our majority leader. The minority cannot rule over the majority”, said Akande. 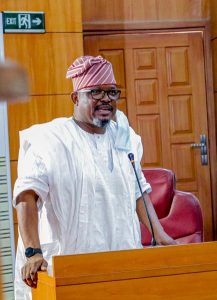 While responding, the Majority Leader, Hon. Sanai Agunbiade, said he was embarrassed by the comments of those asking him to state where he belongs on the issue. He added that with the vote of confidence passed on the Speaker, those behind the purported impeachment plan have been disgraced.

“I know fully well that impeachment of the Speaker cannot be done on the social media and it takes a process,” said Agunbiade.

All lawmakers in attendance took turn to appreciate the legislative acumen and leadership of Speaker Obasa. 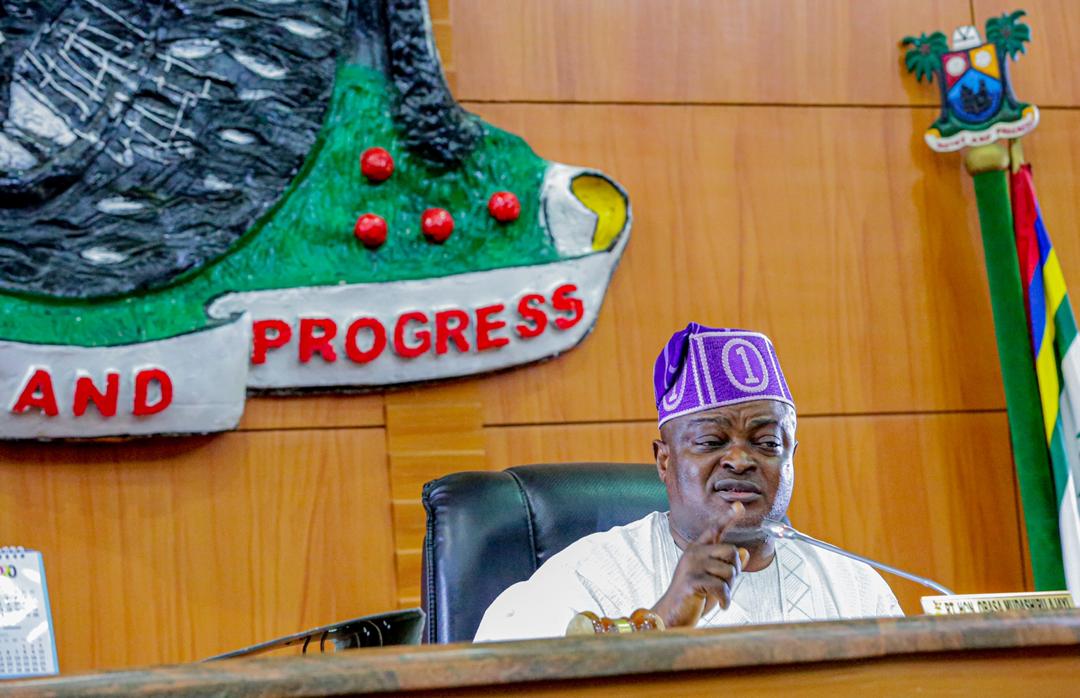 However, the Speaker of the House, Rt (Hon) Mudashiru Obasa, said: “I don’t entertain any fear concerning the media reports. My becoming the Speaker was through the Almighty Allah. This House of Assembly is one and will remain one forever. The House is not divided.”

Obasa said that the media report that the Economic and Financial Crimes Commission (EFCC) has uncovered 40 duplexes and other properties linked to him was the handiwork of his political enemies.

“I strongly believe that my becoming Speaker was by divine intervention. It was not something planned. It happened through the will of Allah. Being here today as Speaker with you is still by the grace of Almighty Allah. So, if one believes this, he would have peace of mind,” he said.

The Speaker said the House is one and continue to remain one.

“This House will never be divided. If there is anybody that is not please let him adjust himself. Let us see this House as our responsibility.

Obasa noted that everything that has happened since March concerning tuf Assembly is political.

“They have taken me to EFCC. I have been invited and I have honoured their invitation. The invitation continues. So, it is nothing but desperation to get the Speaker out of the way. I just hope EFCC would not allow itself to be dragged into political matters.

“Let us continue to work together in the interest of our people. Those who are chasing shadows will get tired.

“Muyiwa Jimoh was calling America asking for Obasa’s house number. We have the evidence. We have many records and this is a colleague. We just ignored so many things.

“We thank God we are almost all members in the House today and we heard what every member said. It shows that the House is one and peaceful. We will continue to be so and not allow anybody to distract us from doing what we are here for.

“Once again, I pray that Almighty Allah will continue to support each one of us as you have always supported me in this assignment. Thank you.”

Watch Recorded Plenary session via the link below: