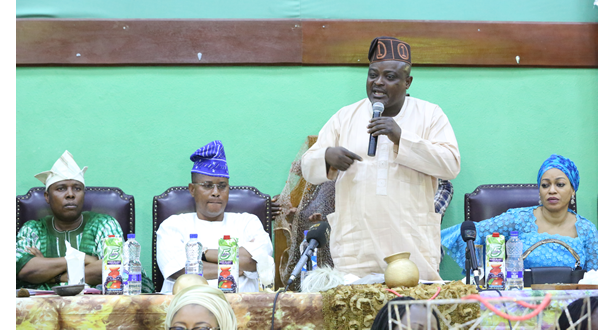 The Speaker of the Lagos State House of Assembly, Rt. Hon. Mudashiru Obasa on Wednesday berated the low turn out of teachers in public schools during the Public Hearing of a proposed law to make the teaching and speaking of Yoruba Language compulsory in all the schools in the State.

The Bill is entitled, “The Promotion and Preservation of the Use of Yoruba Language in Lagos State and for Connected Purposes.”

The Bill was in continuation of the Yoruba Summit Day organised by the House in 2016 as part of measures to promote and preserve the language and its accompanied customs and traditions.

Obasa who made this remark while delivering his keynote address at the Lateef Jakande Auditorium in the Assembly premises, stated that it was disheartening that many public schools in the State were lackadaisical to a programme geared towards protecting the native language from going into extinction.

“We have a lot of public schools in Lagos State, but many of them are not here today. We need to look at that because it is through them (public schools), we can reach out to the children. I have observed that we don’t have many of them in this gathering,” said the Speaker.

He however explained that this could prompt the House to direct all the lawmakers to go to their respective constituencies to educate residents on the import of the law.

The Speaker further stated that it was saddening to see young children and the elderly at times having difficulty in speaking Yoruba language.

According to him, “I have the privilege to travel far and wide, but do you know what? Other people cherish their natve languages so they are developed and more sophisticated than us. So the question is, why is it so difficult for us to speak our language?”

Obasa, however, explained that the proposed law was not to intimidate anybody but “it is to encourage our children to start speaking in our mother tongue.”

While delivering his welcome address, the Chairman of the House Committee on Education, Olanrewaju Ogunyemi explained that “these decisions are hinged on our observation that the United Nations Educational, Scientific and Cultural Organization (UNESCO) has set aside 21st February of every year as international Mother Language Day.

The Chairman also added, section 1(10) (a) of the National Policy on Education (NPE) states that ” Government appreciates the importance of languages as a means of promoting social interaction and national cohesion; and preserving cultures.”

Ogunyemi therefore argued that in line with these provisions it would be inappropriate for “most schools now regard the use of the native language as a vernacular.”

In his contribution, a representative of the Lagos State University (LASU), Dr. Rufus Olaoluwa observed that section 5 of the Bill which stated that “a credit in Yoruba Language shall be acceptable as part of requirements into any tertiary instition in the State” would be difficult to enforce.

He advised that instead of the provision in Section 5, students should be compelled to study the language up to SS 3 and that it should be listed as a core subject in schools.

Also speaking, an Executive Secretary from Education District 5, Mrs. Anike Adekanye explained that emphasis should be laid on teaching primary schools pupils the language, and added that it would be difficult to lay emphasis on the older generation.

She advised that parents should speak the language to their children at home.

Another participant, Mr. Babatunde Ajani recalled that he and others started promoting Yoruba Language in England in 2002, and revealed that they got about 50,000 pounds from DFID to buy some Yoruba literature from Nigeria to aid the teaching of the language in England.

He however, lamented that some of the books he got were not internationalised and that this became a problem for him and his colleagues.

“We must internationalise the language as the Chinese and Koreans did. I had to come up with some instructional cards to aid its learning. I produced a flashcard and wall chart to promote the language, but the Nigerian government did not support us,” he said, adding that the law should be stringently enforced if it is eventually passed.

She also urged mothers to teach their children Yoruba Language, and charged the lawmakers in the state Assembly to always honour invitations to appear on Yoruba programmes on the television.