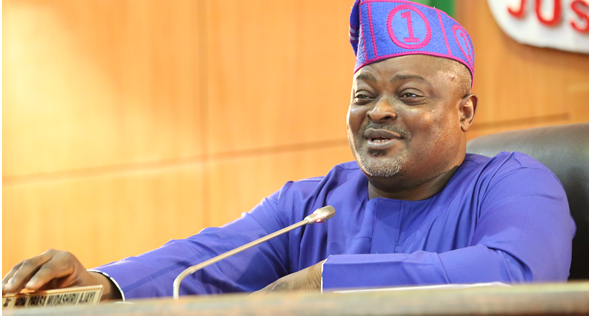 The Speaker of the Lagos State House of Assembly, Rt. Hon. Mudashiru Obasa has tasked every Nigerian to imbibe the spirit of National patriotism and do away with every immoral attitude.

The Speaker gave this reaction while reacting to the recent discovery by the Economic and Financial Crimes Commission (EFCC), in which the commission recovered a staggering sum of $9.8 million and another sum of £74,000 from property belonging to a former Group Managing Director of the Nigerian National Petroleum Corporation (NNPC), Dr. Andrew Yakubu in Kaduna.

Obasa, while lamenting the level of corruption that occurred under the administration of President Goodluck Jonathan, wondered why an individual will amass such huge amount of money to himself.

“It is very unfortunate and disheartening to hear this kind of news. I am beginning to wonder what has happened to our morality. Nigerians can now see that a lot of corruption happened under the watch of Jonathan especially in NNPC,” he said

Speaking tthrough his Special Adviser on Political and Legislative Matters, Hon. Mufutau Egberongbe, the Speaker, in a statement in Lagos, commended the Federal Government for introducing the whistle blowing policy, which helped in the recovery of the money allegedly stolen by Yakubu.

Speaking further, Obasa stated that “if a state like Lagos could be making huge amount of money through its Internally Generated Revenue (IGR) and the state Governor, Mr. Akinwunmi Ambode is investing this money in the development of infrastructure so as to bolster the state economy; it shows that he is patriotic.

“Governor Ambode initiated the Lagos Marathon race; he also initiated the One Lagos Fiesta and these initiatives are booming the economy of the state. One cannot also do without talking about the proposed Fourth Mainland Bridge and some other infrastructural developments going on across every part of the state.

“This is what everyone of us should emulate as individuals, government workers or politicians. We shouldn’t see this position as an opportunity to accumulate ungodly and illegal wealth. We should allow National Patriotism to be our watchword.

“We in the Lagos State House of Assembly believe in this and that is why we have been patriotic enough to come up private members bills, some of which have already been passed and signed into law. Private member bills are proposed laws initiated and sponsored by members from the House of Assembly.

“Lagosians would attest to the fact that some of these bills, which include the Neighbourhood Safety Corps Agency law, Kidnapping law, Property Protection law and few others, are already yielding good fruits. We came up with these laws to show our patriotism to the state and those that elected us,” the statement read in part.

While calling on the Federal Government to strengthen the whistle blowing policy, the Speaker explained that there is the need to re-introduce and Civic and Moral Education in schools right from primary to tertiary institutions.

He also advised the government to ensure that those who may be willing to refund stolen or looted fund, should be handled in a subtle manner, noting that this will surely encourage looters to refund what they have stolen.