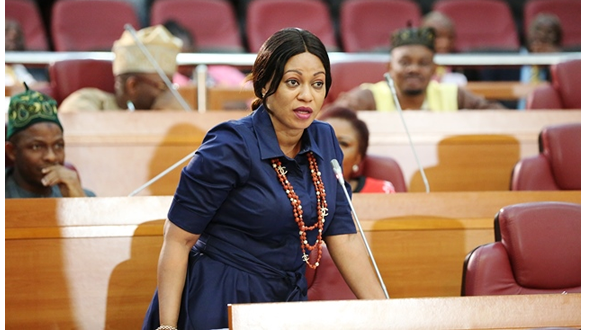 In a bid to know the level of preparedness towards the forthcoming election by the Lagos State Independent Electoral Commission (LASIEC), Chairman, Lagos State Committee on Judiciary, Public Petition, Human Rights and LASIEC, Hon. Adefunmilayo Tejuoso has led members of the Committee to the Office of the Chairman of the Lagos State Independent Electoral Commission, Rtd. Mrs. Ayotunde Philips on oversight function.
Hon. Adefunmilayo Tejuoso stated that the purpose of their visit to the Commission was to know the level of preparedness towards the forthcoming election and needed to have a briefing on what has transpired and logistics needed by the Commission to make the election a success as efforts are in top gear to conduct a free, fair and credible poll by the Commission.
While responding, Mrs. Ayotunde Philips said that, “We are very ready for the coming election. We have started sensitizing the people and the Lagos State Government has disbursed funds to make it a success. ”
She further stated that several meetings have been held with people in Badagry, Ikorodu, Epe, the market men and women. “We are also hoping to have an evaluation after the election to know how the people feel because we want to make it a legacy,” she added.
Ayotunde also lamented the state at which LGs/LCDAs LASIEC offices are and advised that they should be upgraded .
A member of the Committee, Hon. Adekanye Oladele representing Lagos Mainland I Constituency, commended Mrs. Ayotunde Philips, stating that her pedigree had spoken for her. “Since she has been here for the past few months, she has been thriving that total excellence is attained in the Commission”.