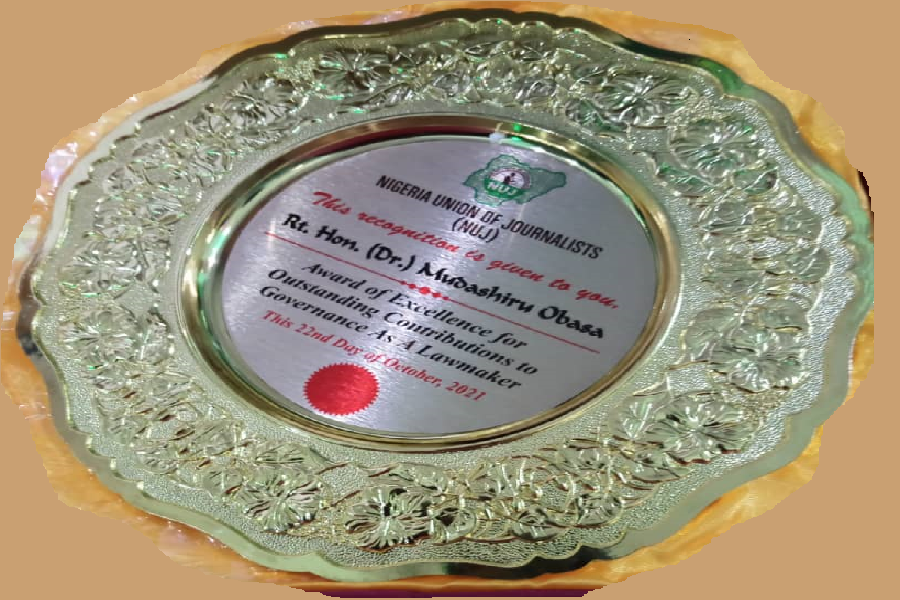 The Oranmiyan Hall of the Lagos Airport Hotel was filled by colourful, beautifully dressed journalists in the cool evening of Friday, October 22. It was the end of a weeklong celebration tagged Lagos Press Week organised by the Nigerian Union of Journalists (NUJ), Lagos branch, and meant to celebrate men of the pen profession.

Dr. Mudashiru Ajayi Obasa, the Speaker of the now most vibrant House of Assembly in the entire Nigeria, was one of those honoured, not just for his philanthropy, but for the fact that through him as Speaker, Lagos state has been shaped positively beyond the expectations of residents.

The President of the NUJ, Chris Isiguzo, did not mince words when he noted that the laws coming out from the Lagos State House of Assembly have done good to the development of the entire country. Isiguzor was full of praises for the Speaker, the members of the House and Lagos. To him, if you are not in Lagos, you are missing.

The NUJ President is not alone on the beautiful achievements of the Lagos State House of Assembly, working in close proximity with the other arms of government to meet dreams and aspirations. A top official of the union specifically mentioned the recent bill passed by the House stopping the public parade of suspects when they have not been convicted. The House had argued that parading suspects gives the impression that they are guilty even before the court would finally make pronouncements.

It is sweet to realise that all eyes are on Lagos to always create the pathway of development through policies, laws, motions and resolutions with the residents in mind.

It is sweeter knowing that there is a Speaker who knows his onions, has a grasp of governance and how to achieve growth and development. Through him, the State now has the Neighborhood Safety Corps, an enviable community security outfit whose operation has been studied by some states of the federation. The House is currently considering a bill to create a training institute for security agents in the State, which would possibly benefit agencies in Nigeria and parts of Africa, especially at this time of mass condemnation of the activities of some security agents.

Poised to ensure the safety of lives and property, a constitution-stipulated responsibility of the government, the House, under Obasa, recently passed an anti-open grazing bill. This is aside the bill against kidnapping passed sometime ago by the lawmakers.

Isiguzo understands that being a resident of Lagos is beautiful. Obasa and his colleagues understand that making Lagos beautiful is not a tea party. They hardly sleep. Visit the Assembly even when the lawmakers are supposedly on recess. Chances are you will meet many of them working.

Earlier this year, Obasa was honoured and appointed first ever Grand Patron of the Lagos branch of the Nigeria Association of Women Journalists (NAWOJ) which said it took the decision after years of studying the Speaker and his activities.

And to be further recognised and honoured by members of the Fourth Estate of the Realm shows that the Speaker is appreciated. The NUJ said at the event it does not just honour people. It does only when a beneficiary has proven to merit it.