The Speaker of the Lagos State House of Assembly, Rt. Hon. Mudashiru Ajayi Obasa has commiserated with the two Members of the House from Ikorodu constituencies who lost their fathers on Sunday, November 6, 2016 respectively.
Alhaji Yunus Agunbiade, father of the Majority Leader of the House, Honourable Sanai Agunbiade; and Alhaji Solaja, father of Honourable Nurudeen Saka-Solaja, Chairman of the House Committee on Science and Technology both died early Sunday, few hours from each other. Agunbiade represents Ikorodu Contituency 01 in the House while Solaja is the representative of Ikorodu Constituency 02.
In his condolence message on Sunday signed by his Chief Press Secretary, Mr. Musbau Razak, the Lagos Assembly Speaker described the deaths of the patriachs of Agunbiade and Solaja families as coming at a time when their words of wisdom, experience and prayers are needed most. Obasa stated that though the deceased persons died at advanced ages, nobody willingly wants to lose his or her parents no matter how old.
“However, we must take solace in the fact that the two men lived  fulfilled lives 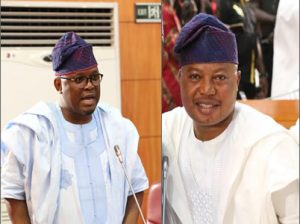 as exemplified by the offsprings that survived them particularly our own Honourables Sanai Agunbiade and Nurideen Saka-Solaja,” he said.
While commiserating with the people of Ikorodu and Imota communities in Ikorodu Local Government, Rt. Hon. Obasa prayed to God to give the two communities, particularly the Agunbiade and Solaja families the grace and fortitude to bear the huge loss.