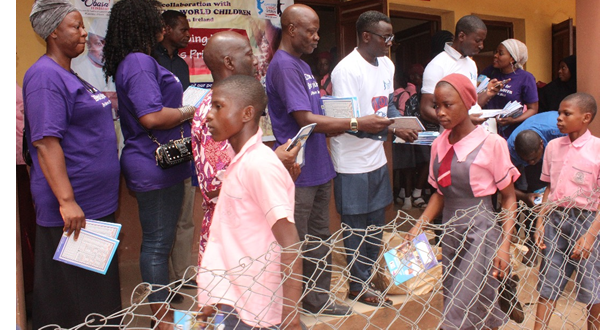 More than 2000 pupils and teachers benefitted from the event held at the school premises on Tuesday where exercise books and pens were shared out by the foundation.

Founder of the foundation, Mr. Adekunle, said the organisation was formed to promote the ideals of the Speaker of the Lagos State House of Assembly, Rt. Hon. Obasa , who according to him saw education, sports and entertainment as vital tools in bridging the gap between the poor and the rich.

He noted that the cardinal philosophy of Obasa Foundation was to affect the lives of the less-privileged persons, through interventions that bring radical improvement for them.

Mr. Adekunle said that the gesture was intended to cater for basic educational needs of indigent pupils in Agege adding that in African setting we were our brother’s keeper.

According to him: “Education is the best gift and legacy, that can be bequeathed on a child, and in traditional African parenting a child is raised by the whole community.

“Hon. Obasa is one person, who will give his right

arm to support anybody’s education and general wellbeing. It was in the light of this that we carried out the exercise as part of our efforts to meet the school needs of indigent pupils. ”

During the event, Mr. Adekunle advised the pupils to make good use of their time by reading their books and organising study groups with friends.

In her remark, Mrs. Oshubu of the Lagos State Education District 1, who spoke on behalf of the school management described the donation of the books to the school as a boost to teaching and learning.

She added that the foundation has stepped in where some of the families and guardians of the pupil failed due to disadvantaged backgrounds.