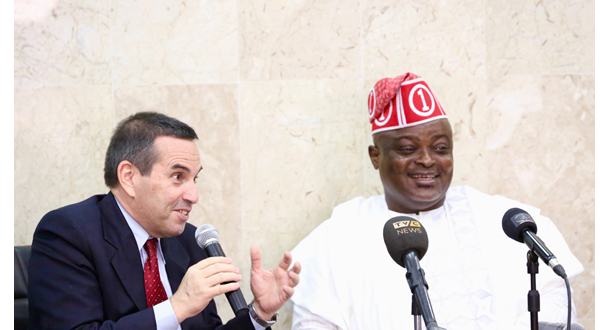 Obasa stated this while playing host to the Israeli Ambassador to Nigeria, Guy Feldman who was accompanied by the Senior Economic Officer at the Embassy, Florence Osuji and Managing Director Emi Systems, Eyal Mesika.

The Speaker, who recalled the long standing relationship between Nigeria and Israel, noted that Lagos Assembly and Israeli parliament would be better off through exchange of programmes.

According to him, “We have thrown our hands open to embrace your ideas to develop and interact mostly here in Lagos where we have the heartbeat of the nation. We can as well exchange programmes in terms of parliamentary activities.

“It is truly a great opportunity for us to partner with Israel. We have had relationship in the past and I am sure Nigerians benefitted from this relationship.

“We have had many of your experts in Nigeria, our people have benefitted in terms of education, egneering and some other things you have been doing. And we still have lots of your companies in Nigeria working which are beneficial to us.

He added, “Your coming here today is an attestation to the good job Lagos is doing. Our population here is more than 18 million and the economy of Lagos is 5th in the West Africa coast for now. We are sure that we will move to 2nd in africa. We are ready to embrace you and do things that will improve on our economy and well beings of our people in Lagos,” Obasa said.

Earlier, the Ambassador, Feldman explained that Israel with a population of 8.5 million, 20 percent muslims and the remaining percentage for the Jews, said that the country had witnessed a lot of challenges but had to learn and forge ahead.

According to him, “We had so many challenges in the past but that had given us a lot of ideas,” Feldman said.

The Ambassador said Nigeria is blessed with a lot of resources, saying the country has “huge land, wonderful people; we can cooperate on that.”