Ogunyemi Commends Ambode For Embarking On Massive Renovation of Schools 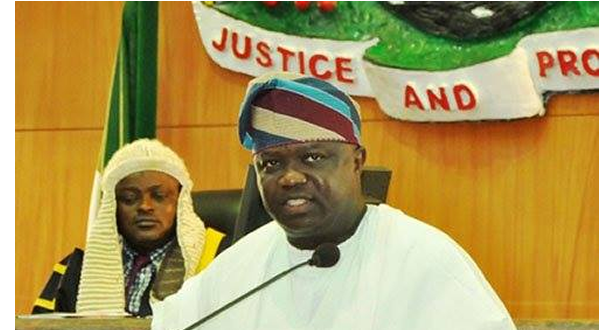 Ogunyemi Commends Ambode For Embarking On Massive Renovation of Schools

Governor Akinwunmi Ambode of Lagos State has been commended for embarking on massive renovation of several schools and for his Midas touch in the education sector in the state.
Speaking to journalists after a tour of some of the renovated public schools in the state, Chairman of the Education Committee of the state assembly, Hon. Olanrewaju Ogunyemi stated that the projects were commendable.
Ogunyemi, who is representing Ojo Constituency 2, declared that he was convinced that the Governor was passionate about education having gone round some of the schools that were renovated and rehabilitated.
“I have seen schools that have been renovated and I give kudos to the Governor because he has done very well.
“This government must be commended for their efforts. The Governor has really done so much in the last two years, particularly in overhauling infrastructure in the education sector.
“What we have seen so far shows that there is so much hope for education in the state and I would say that the state of complete dilapidation of infrastructure in the schools has been turned around.
“I must commend the Governor and state the Ministry of Education ably led by the Deputy Governor, Dr. Oluranti Adebule for a job well done, and for monitoring the contractors to deliver a good job,” he said.
The lawmaker also gave kudos to the state’s House of Assembly under the leadership of the Speaker, Rt. Hon. Mudashiru Ajayi Obasa.
He emphasised that the House should be praised for ensuring that the executive is closely monitored, for appropriating funds, for following up and monitoring to make sure that the fund expended is put into good use.
On the renovation works done at the Model College, Meiran, Ogunyemi stated that this was an aftermath of the observation of the committee during its visit to the school about a year ago.
He said: “We visited the school over one year ago and we complained about the state of facilities there.
“The hostel accommodation, the toilets, the classrooms, the water system has improved.
“The house of assembly is happy that our Governor is working and that the Ministry of Education is responsive to the observation of the House.
“I think on the whole, we are pleased that our oversight function is yielding the desired results. We came and we spoke, while the government has responded.”
The politician promised that the committee would not rest on its oars, saying that it would pay regular visits to the schools in the state to assess the facilities that have been put in place.
According to him, the committee would ensure that the facilities are used very well, adding that the principals of the schools have been told to ensure that the hostels masters and captains ensure that the students use the facilities very well.
The Committee Chairman explained that it is important for the state government to overhaul the facilities in the schools regularly.
Education, he said is an expensive venture, “because we are producing leaders of tomorrow there is no money that we spend on education that is too much.”
Ogunyemi used the opportunity to call on corporate organizations, well meaning members of the public and philantropists to support the state government on education as he said that the government could not do it alone.
“We need public spirited individuals, corporate organizations and philanthropists to come up and exhibit corporate social responsibility and support education.
“Education would always produce personnel that would go back to work in those organizations and due to competing demands on the government, we need the support of the state on education.
“I am happy that some organizations, individuals and corporate bodies are contributing to move education forward in the state. For example, House on The Rock that donated computer facilities to the Model College, Meiran
“Some others such as Daystar Church, Chief Kessinghton Adebutu, Mrs. Alakija, and GTB, which renovated some of our libraries have done a lot. We want to call on others to contribute to education in our state,” he said.
Some other schools visited by the committee included Millennium Junior and Senior Secondary School, Egbeda, Estate Junior High School, Ifako/Ijaiye, and Dairy Farm Senior Secondary School, Agege.
Other members of the committee on the visit were Hon. Akeem Shokunle (Oshodi/Isolo1) and Hon. Jude Idimogu (Oshodi/Isolo2).