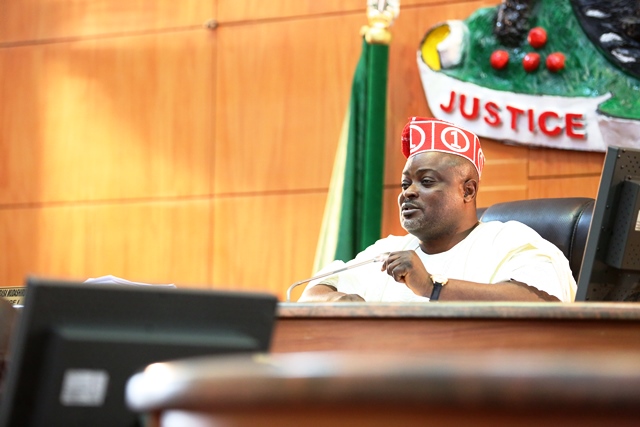 Speaker of the Lagos State House of Assembly, Rt. Hon. Mudashiru Obasa, has described the introduction of a website, through which motorists and law enforcement agencies can verify the authenticity of vehicles number plates, as a welcome development.
The Speaker, while commending the Smart City initiative by Governor Akinwunmi Ambode and the Lagos State Motor Vehicle Administration Agency (MVAA), noted that this initiative is a right step in the right direction, as it will no doubt curtail all forms of criminal activities in the state.
The General Manager, MVAA, Mr. Lateef Lawal recently announced the existence of the website, which he said became necessary in order to eradicate the unnecessary harassment of motorists by officials of the Nigerian Police, Federal Road Safety Corp (FRSC) and other Security Agencies.
In a statement issued from the office of his Special Adviser on Political and Legislative Matters, Obasa, while noting that this will go beyond eradicating harassment by law enforcement agencies, stated that “personally, I believe that the introduction of this website will do more than eradication of harassment by officers of the law. It will also help reduce crime rate in the state.
“Let us imagine a situation where a vehicle with a particular registration number plate is used to perpetrate a crime in place and the number is captured, once that number is entered on website, it will reveal every detail about the car including the name of its owner, vehicle model, colour of the car and so on.
“With that, once the security agencies can immediately be alerted, they can go through this website and use the number on the plate to search for other details of the car and they can communicate with police in every part of the state and eventually, such a car can be tracked.
“A case where some people will use a vehicle to either rob or kidnap and think they can escape, all that is needed is the number on that plate. If the number is genuine, then it is certain that the vehicle will be located with the help of the security agencies,” Obasa stated.
He, however, advised the state government to improve on the system in such a way that it would be able to track a stolen vehicle. He also advised the general public particularly motorists, FRSC and other Security Agencies to visit the MVAA’s website to verify the authenticity and genuineness of number plates issued by the MVAA.
SIGNED:
Hon. Mufutau Egberongbe
Special Adviser to Rt. Hon. Mudashiru Obasa
Political and Legislative Matters